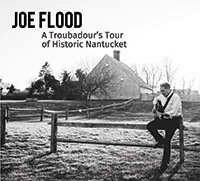 NANTUCKET, MA – The Nantucket Historical Association (NHA) is pleased to announce a world premiere concert and release party of new music inspired by Nantucket history from singer/songwriter Joe Flood on Friday, June 30, 2017 at 6 P.M. at the Whaling Museum, 13 Broad Street.

Over the last year, Flood has immersed himself in stories from the past, and absorbed the essence of the island’s rich history at some of its most iconic sites. His personal experiences and historic research have culminated in a full-length album of original new music, entitled A Troubadour’s Tour of Historic Nantucket. From the early Wampanoag days to the art colony of the 1930s, Flood captures Nantucket history and brings it to life like never before. This world premiere concert features Flood playing the full album on acoustic guitar and bass, accompanied by bassist Andres Villamil.

“The most exciting aspect of the performance is that we will be playing the first album I’ve ever written with such specificity about a particular place, in that place, for the first time,” says Joe Flood. “I think it will be a unique experience both for us and the audience.”

A multi-instrumentalist, Flood performs a rock-blues-country-folk blend of music and has played throughout New England and beyond. He is a veteran of the downtown NYC roots rock scene that swept through clubs like the Ludlow Street Cafe, Nightingale, and Rodeo Bar in the 1980s. He has released five albums under his own name and been featured prominently on several albums by other musicians. His 2015 release Songs From the Bend in the River was a tribute to three 19th-century songwriters from Middletown, Connecticut where Flood grew up. The album was the product of three years of research funded by a grant from the City of Middletown and another from the Connecticut Commission on the Arts.

“There is a certain pressure, a responsibility, to ‘get it right’ when performing this material about Nantucket for an audience from Nantucket,” says Joe Flood. “The world I have tried to bring to life in these songs is all within walking distance of the Whaling Museum. My hope is that even the regulars, people who know the island’s history well, will walk out of the concert seeing these places at least a little bit differently.”

“We are thrilled to welcome Joe Flood to the museum for this very special, one-night only musical experience,” says Marjan Shirzad, NHA Sacerdote Chair of Education and Outreach. “The NHA’s mission is to tell the inspiring stories of Nantucket, and what better way to do that than with an evening of music inspired by our island’s rich history?”

Admission for this evening is $10 per person. Tickets are on sale now at www.nha.org/tickets.