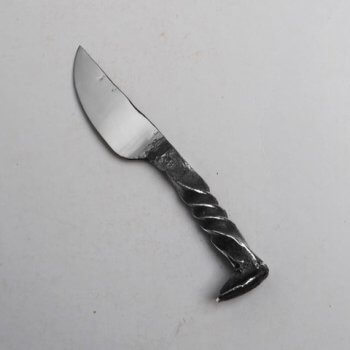 Learn the basic techniques of blacksmithing and making a blade from a new railroad spike in this workshop.  Students will have the opportunity to make their own knife, as well as gain knowledge required to continue to pursue the craft outside of the class.

Keaton is a blacksmith and metal artist based on the island of Nantucket.  His craft centers around his dual passions for inventive repurposing of junk and creative reinterpretation of classic weaponry from the beloved mainstay of his childhood: video games.  Keaton is an artisan committed to the highest ideals of his discipline; he seeks to create objects that are not only visually arresting, but also functional.

Keaton was fortunate enough to be invited to participate on “Forged in Fire” in the fall of 2019.  He was featured on “Japanese Ono” Season 7, Episode 33, where he won first place and earned the title of Forged in Fire Champion.  To learn more about Keaton and his creations, join the growing community of subscribers to hisYouTube channel where he posts videos of all his most complex builds, and his Instagram account where he posts photos showcasing his work.