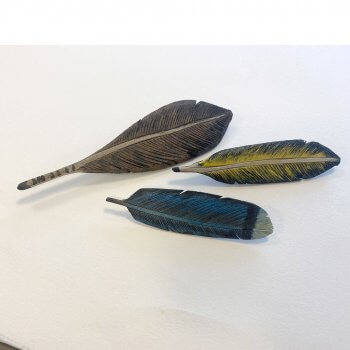 The History Makers Series connects objects from the NHA collections with its history, and the process of making the object.  Take a behind the scenes tour in the NHA collections, with an NHA curator,  to see examples of carved shorebirds and decoys.  Learn how objects are cared for, cataloged, and kept for future generations to learn from.  Following the tour there is a hands on maker session with Bill Sarni, master bird carver, where you will be carving and painting bird feathers.  This workshop will give you a taste of the methods used in traditional bird carving, but in an abbreviated process.

Feathers can be finished as pins and become wearable art.