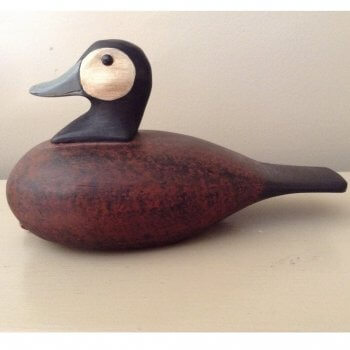 We will be carving a drake Ruddy duck decoy similar to the ones used by hunters along the east coast. We will be using hand tools to carve using native white pine wood. We then detail, sand, and paint using acrylic paints. The Ruddy is one of the hardest ducks to decoy as they are normally nocturnal flyers, and a very solitary bird, making it less popular to hunters. This makes the Ruddy decoys fairly rare and much sought after by collectors. The Ruddy does winter on Nantucket and have been observed on Miacomet Pond, Hummock Pond and Clarks Cove.