NANTUCKET, MA – The Trustees of the Nantucket Historical Association (NHA) are pleased to announce the acquisition of a rare first edition of the earliest navigational chart of Cape Cod and the Islands, created by Dutch cartographer Arent Roggeveen in 1675. A generous gift from the Friends of the Nantucket Historical Association, this chart is the first detailed mapping of the area around Cape Cod, extending from Rhode Island up to Plymouth. This is an exciting start to 2020 and fills a hole in the NHA’s map collection, as identified by a collections survey conducted in 2019. 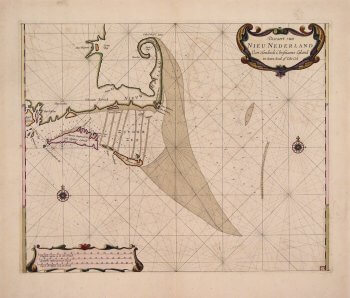 Friends President Bill Boardman and Steve Langer, chair of the Friends Acquisitions Committee, guided by Art Kelly, a member of the Friends and a collector of rare maps and charts, arranged the purchase from Jack Fritsch of Antiques Depot, Nantucket. A committee made up of Amelia Holmes, NHA Research Library Director; Dan Elias, Robyn & John Davis Chief Curator; Langer; Fritsch; and Michael Buehler, an independent map consultant of Boston Rare Maps, traveled to the New Bedford Whaling Museum, where the chart was on exhibit, loaned by the former owner. The first edition map is colored, which appears to have been applied when the chart was printed. The history of the impression is known, and the condition is as nearly perfect as a 345-year-old chart can be. This chart predates by a hundred years the next-oldest navigational chart in the NHA collection.

Arent Roggeveen, born in 1628 in the Netherlands, was steward of navigational charts and documents for the Dutch East and West India Companies. He compiled the first series of large-scale charts of North America’s coastlines, a landmark, as many had never been mapped in such detail.

“Art Kelly was our guide through this acquisition process” says Elias. “His knowledge and connections in the world of antique maps and charts led us to a thorough understanding of this wonderful example, perhaps the best existing impression of this important, early study of the hydrography of Nantucket, its shoals, sound, and approaches.”

“The Friends of the NHA have filled a known gap in our collection with a superlative example, thus furthering our understanding of charting these waters,” says James Russell, Gosnell Executive Director of the NHA. “I thank the Friends for this extraordinary gift and salute Art Kelly, Steve Langer, and Bill Boardman on the successful pursuit of this rare piece in the puzzle of Nantucket history.”