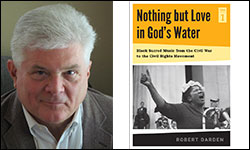 NANTUCKET, MA – The Nantucket Historical Association (NHA) is pleased to announce that it will be hosting author Robert Darden for a lecture entitled “Gospel Music and the African American Experience” on Wednesday, June 14, 2017 at 6 P.M. at the Whaling Museum, 13 Broad Street.

Darden will chronicle the history and role of music in the African American experience and will comment on how composing songs and singing them helped African Americans endure slavery and suppression.

“Like any writer or historian, I look for any excuse to return to one of North America’s most evocative, most historic settings – Nantucket,” says Robert Darden. “As someone who has spent decades immersed in researching the freedom struggle of African Americans, time spent on Nantucket is especially meaningful. Nantucket was among the earliest communities to abolish slavery and became a refuge for escaped slaves. This is one of those rare stories that combines heroism, adventure, and music.”

In addition, Darden spent twenty years as senior editor for The Wittenburg Door and another fifteen years as Gospel Music Editor for Billboard Magazine. In 2016, he created the radio insert “Shout! Black Gospel Music Moments” for KWBU-FM Waco. Darden researches, writes, and records the weekly show, which now airs on eight NPR stations.

He and his wife, Dr. Mary Landon Darden, live in Waco, Texas, and have three children and four grandchildren.

“The NHA is pleased to welcome Robert Darden to the Whaling Museum for this one-of-a-kind evening lecture,” says Brianne Roth, NHA Public Programs Coordinator. “His knowledge of gospel music and the African American experience will provide visitors with unique insights into significant era in American history.”

Tickets for this lecture are free for NHA members and $10 for the general public. Advance ticket registration for these lectures is recommended at www.nha.org/tickets.