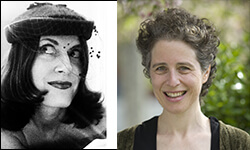 NANTUCKET, MA – The Nantucket Historical Association (NHA) is pleased to present “Love in the Springtime,” a special concert featuring Grammy-nominated pianist Jennifer Maxwell and renowned soprano Jessica Heuser at the Whaling Museum, 13 Broad Street, on Thursday, May 11, 2017 at 6 P.M.

“We are thrilled to welcome Jennifer Maxwell and Jessica Heuser for this wonderful springtime concert,” says Brianne Roth, NHA Public Programs Coordinator. “Guests will delight in Maxwell and Heuser’s extraordinary talents as we celebrate the new season.”

Dr. Jennifer A. Maxwell holds a Doctor of Musical Arts degree from Boston University. She received a Master of Music degree from the University of Louisville on full fellowship as a student of Artist-in-Residence Lee Luvisi and a Bachelor of Music degree with honors and highest distinction on full scholarship from the University of Iowa. She has also trained at the Brandywine Piano Institute in West Chester, PA, and the Chautauqua Institute in Chautauqua, NY. A committed educator, she has maintained a private teaching studio throughout her career, working with pianists of all ages and levels. She spends half of her time on Nantucket, where she is a faculty member at the Nantucket Music Center (NMC). In May, she was announced as a quarterfinalist for the 2016 Music Educator Award, presented by the Recording Academy and the Grammy Foundation for her work at NMC.

Jessica Goodenough Heuser, soprano, began voice training at the age of fourteen at Washington University in St. Louis, and later earned her Bachelor of Arts in Vocal Performance there. She specialized in Baroque vocal technique and studied in schools from Vancouver to Texas. Heuser lives on Nantucket and enjoys singing in many of the island’s churches. She also directs the NMC’s Youth Chorus and teaches “Music Together” for children and their caregivers. Heuser has two sons, Luca and Leo.

Tickets for this concert are $10 per person and available at www.nha.org/tickets. Advanced registration is recommended.