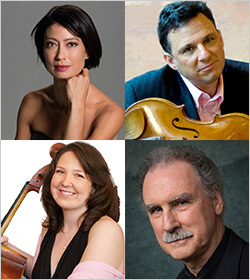 NANTUCKET, MA – The Nantucket Historical Association (NHA) is pleased to announce the return of the world-famous Walden Chamber Players piano quartet for a performance on Friday, September 15, 2017, at 7 P.M. at the Whaling Museum, 13 Broad Street.

Founded in 1997, the Walden Chamber Players are considered one of the most exciting and versatile chamber groups performing today. The Walden Chamber Players bring together rousing and eclectic combinations of string, piano, and wind ensembles that draw from a rich palette of sources and styles. Based in New England, the ensemble performs in some of the most prestigious venues throughout the United States.

Tickets for the performance are free for NHA members and $10 per person for the general public and can be purchased at www.nha.org/tickets. Doors open at 6:30 P.M., with the concert beginning promptly at 7 P.M.

“The NHA is thrilled to welcome back the Walden Chamber Players for an exciting performance at the Whaling Museum,” says Brianne Roth, NHA Public Programs Coordinator. “This year’s selections will surely delight and inspire music lovers of all ages.”

The Walden Chamber Players appearing at the Whaling Museum are:

Donald Palma: Bassist Donald Palma is a founding member of the Orpheus Chamber Orchestra. He received his formal education at the Juilliard School and joined Leopold Stokowski’s American Symphony Orchestra at the age of twenty. At twenty-four, he joined the Los Angeles Philharmonic, and later joined Canada’s National Arts Centre Orchestra as principal bass. He recorded the complete Wagner Ring Cycle with James Levine and the Metropolitan Opera, and has made over fifty recordings with Orpheus for Deutsche Grammophon including a Grammy-award winning Stravinsky CD. Palma was music director of the San Francisco Contemporary Music Players, and won two ASCAP-Chamber Music America Awards for adventurous programming. Palma has given master classes at Rice University, the Hart School, the Juilliard School, the Manhattan School of Music, Mannes College, and the Toho School.

Laura Frautschi: Violinist Laura Frautschi has established a reputation as a versatile musician with a strong commitment to contemporary as well as classical repertoire. Her chamber music activities include appearances at the Caramoor International Festival, Metropolitan Museum of Art, Wellseley Composer Conference, Moab, and St. Bart’s Music Festivals, as well as tours throughout Japan and the U.S. as a member of piano trio Intersection, with cellist Kristina Cooper and pianist John Novacek. In addition, Frautschi has appeared as concertmaster of the Orchestra of St. Luke’s and the New York City Opera Orchestra, and tours internationally as a concertmaster of the Orpheus Chamber Orchestra. She studied applied mathematics at Harvard College and violin performance with Robert Mann at the Juilliard School.

Christof Huebener: A founding member and Artistic Director Emeritus of the Walden Chamber Players, violist Christof Huebner was born in Vienna, where he attended the Vienna Conservatory and subsequently the Wiener Musikhochschule. Continuing his studies with Michael Tree at the Saint Louis Conservatory as a Fulbright Scholar, he received his artist diploma. Before coming to the U.S., he played with the Vienna Philharmonic Orchestra, the Vienna State Opera Orchestra, and the Vienna Chamber Orchestra.

Ashima Scripp: Artistic Director of the Walden Chamber Players, cellist Ashima Scripp has performed with orchestras, ensembles, and in recitals in major concert halls around the world. She has received top prizes at many prestigious competitions, such as the First Prize in competitions held by the Union League Civic and Arts Foundation, the Skokie Valley Symphony, and the North Shore Musicians Club. She holds degrees from the Manhattan School of Music and Northwestern University, and is on the cello and chamber music faculty of the Longy School of Music and Concord Academy in Massachusetts.

For more information about the programs and events at the Nantucket Historical Association, please visit www.nha.org/programs or call 508-228-1894.