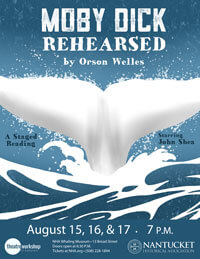 NANTUCKET, MA – The Nantucket Historical Association (NHA), in partnership with Theatre Workshop of Nantucket (TWN), is pleased to announce the triumphant return of the staged reading of Moby-Dick Rehearsed starring John Shea, August 15–17, 2017, at the Whaling Museum, 13 Broad Street.

Written by Orson Welles, Moby-Dick Rehearsed celebrates the enduring legacy of Herman Melville’s masterpiece of American literature and was first performed in 1955 at the Duke of York Theatre in London. The NHA and TWN’s adaptation of this moving play, directed by and starring TWN Artistic Director Emeritus John Shea as Captain Ahab, comes alive under the 46-foot sperm whale skeleton in the Whaling Museum’s Gosnell Hall. Featuring a cast of community actors, the play evokes the essence of the sea and turbulent life aboard a whaleship, as Ahab follows his obsession to find the great white whale.

“We are thrilled to be collaborating with TWN once again to welcome back Moby-Dick Rehearsed to the halls of the Whaling Museum for the seventh consecutive summer,” says Brianne Roth, NHA Public Programs Coordinator. “Returning visitors and new ones alike will delight in this dramatic play in a one-of-a-kind setting.”

All performances will begin promptly at 7 P.M., with doors opening at 6:30 P.M.