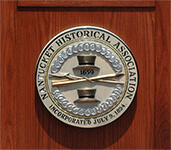 NANTUCKET, MA – The Nantucket Historical Association (NHA) announces that the spring 2017 Food for Thought lecture series will conclude on Thursday, April 13, 2017. This free community program is presented on Thursdays from Noon to 1 P.M. at the Whaling Museum, 13 Broad Street.

The spring 2017 Food for Thought lecture series features presenters from Nantucket and beyond. Speakers include representatives of businesses, organizations, and public-interest groups who provide engaging lectures on timely topics that are aligned with Nantucket’s rich culture. Audience members are encouraged to bring a brown-bag lunch while listening to these informative lectures at the Whaling Museum.

The April 2017 Food for Thought speakers are: 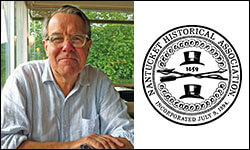 Thursday, April 6, 2017: “Reflections on a Decade at the NHA” with NHA Gosnell Executive Director Bill Tramposch

Join the NHA’s Gosnell Executive Director William “Bill” Tramposch as he reflects on his career at the NHA as he prepares to retire in May 2017.

Since the late 1970’s, Bill Tramposch has held leadership positions in the national and international museum field. He earned a Bachelor of Arts (Phi Beta Kappa) from the University of California, Berkeley; a Masters (American Studies) and a Doctorate (Education) from The College of William and Mary in Virginia. Tramposch was awarded Fulbright Fellowships to New Zealand in 1986 and again in 1988. Subsequently, he was appointed Director of Visitor Services at the new National Museum of New Zealand (Te Papa), and also served as Chief Executive of New Zealand Historic Places Trust. From 1979-89, Tramposch was Director of Interpretive Education at the Colonial Williamsburg Foundation. During his career, he has also been Vice President of the Society for the Preservation of New England Antiquities, President of the New York State Historical Association, and Director of the Oregon Historical Society. He has served as the NHA Gosnell Executive Director since 2006, and in 2014 was appointed to the American Alliance of Museums (AAM) Accreditation Commission. 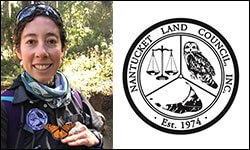 Back from a recent trip to Mexico to visit the overwintering grounds of monarch butterflies, Nantucket Land Council’s Resource Ecologist Emily Molden recounts her experiences of her trip and shares some insight on the monarch butterflies’ status.

Emily Molden has been the Resource Ecologist for the Nantucket Land Council for the past twelve years. She graduated with a Bachelor of Science in Biological Sciences from the University of Vermont with a minor in Wildlife Biology. As part of her work with the Land Council, Molden has been providing educational programs to the local schools and to the public on the monarch butterfly and its migration pattern for over ten years. She works with the non-profit organization Monarch Watch to tag migrating monarchs on their journey down to Mexico to collect more data on their population dynamics and travel pathways.

“Food for Thought provides a fantastic opportunity for Nantucket residents to learn more about the island and one another,” says Brianne Roth, NHA Public Programs Coordinator. “It is so rewarding to be able to offer Nantucketers a free, lunch-time community program on a wide range of topics, from history to nature, arts to mental health, right in the heart of downtown.”

For more information on upcoming Food for Thought programs at the Nantucket Historical Association, please visit www.nha.org or call (508) 228-1894.