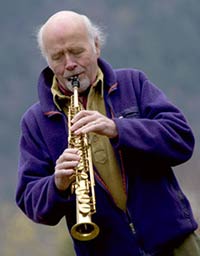 NANTUCKET, MA – The Nantucket Historical Association (NHA) is pleased to welcome legendary musician Paul Winter for a one-night concert on Wednesday, June 28, 2017 at 7 P.M. at the Whaling Museum, 13 Broad Street.

Paul Winter is a saxophonist and composer, and seven-time Grammy winner. Paul Winter’s musical odyssey has long embraced the traditions of the world’s cultures, as well as the wildlife voices of what he refers to as “the greater symphony of the Earth.”

A journey through Paul Winter’s world of “living music,” this concert will feature his soprano sax with the voices of Wolf, Whale, Bull Elk, Whooping Crane, Woodthrush, and other members of what Winter calls “the greater symphony of the Earth.” The concert will be interwoven with stories of Winter’s adventures making music in the wilderness. His playing, and the voices of the creatures, will be accompanied by the recorded sounds of his “two-legged colleagues” of the Paul Winter Consort.

From the early days of his college jazz sextet, which toured Latin America for the State Department and performed the first-ever jazz concert at the White House for the Kennedys in 1962, to his later ensemble, the Paul Winter Consort, his concert tours and recording expeditions have taken him to 52 countries and to wilderness areas on six continents, where he has traveled on rafts, dog sleds, mules, kayaks, tug-boats and Land Rovers.

Winter has recorded 45 albums. Since 1980, Paul and his Consort have been artists-in-residence at New York’s Cathedral of St. John the Divine, where they have presented over 200 unique events, including their famed annual Winter Solstice and Summer Solstice Celebrations. Paul’s current project is “Flyways: A Celebration of the Great Bird Migration from Africa through the Middle East to Eurasia” which will incorporate indigenous music of each of the sixteen countries over which the birds fly, interwoven with the voices of the birds.

“The NHA is delighted to welcome back Paul Winter for the second summer in a row to delight guests with his musical talents,” says Brianne Roth, NHA Public Programs Coordinator. “Winter’s blend of soprano sax and sounds from the wild will surely inspire guests of all ages.”

This concert is being presented with the generous support of the Hall-Froelich Foundation.

Admission for this evening is $25 per person for the performance, with a short reception immediately following. Tickets are on sale now at www.nha.org/tickets.