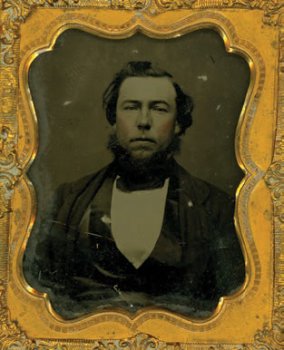 Andrew J. Sandsbury’s first whaling voyage to the Pacific was as a boatsteerer aboard the brig Sea Queen of Westport (1851–55), followed by two voyages on the Nautilus of New Bedford, as second mate (1855–59) and then first mate (1859–64). He served as mate of the South Shoal Lightship between 1867 and 1869 before making one final whaling voyage in the bark Spartan of New Bedford (1869–72). He rejoined the South Shoal Lightship in 1872, serving until 1892. He was mate for Captain Thomas S. James until 1881, when he himself was appointed captain of the lightship. His brother William Penn Sandsbury also served on this lightship for many years. In 1892, after a terrible, storm-tossed season on the lightship, Andrew was appointed keeper of Brant Point Lighthouse, where he served until declining health compelled his resignation in 1898.

When seas were calm aboard the lightship, Sandsbury wove rattan baskets, probably learning the craft aboard from Thomas James and others. His work remains today highly prized.