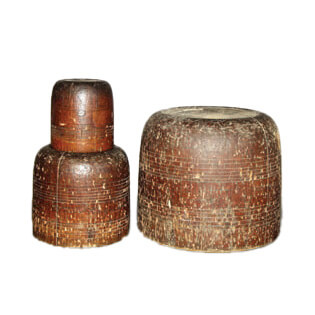 Born on Nantucket, Charles B. Ray began his career at sea as a young boy and eventually became a well-respected whaling captain, commanding five whaling voyages to the Pacific between 1831 and 1851. He retired from the sea to a farm on Nantucket and began making baskets sometime in the 1850s or 1860s. He was prolific, making hundreds of baskets a year, yet his baskets were known for their neatness and beauty. He made many covered examples, and claimed to have made 306 baskets in his 80th year alone.

Ray and his wife, Clarissa Folger, had four children. When his grandson, Clinton “Mitchy” Ray, was seven years old and sick with diphtheria, Charles passed on his knowledge of basket making to the young boy in a shed on Starbuck Lane, where Mitchy later continued his family’s basket making tradition until he, himself, died in 1956 at age 85. Charles B. Ray’s basket making career was the beginning of a long history of mentoring basket makers from whom a number of today’s contemporary makers descend.