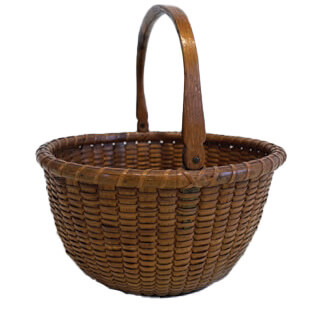 Thomas S. James is credited with popularizing basket making aboard the South Shoal Lightship, where he served as mate and, later, from 1872 to 1881, as captain.

James was the son of Thomas James and Elizabeth Winslow. He and his wife Eliza Ann Bump had four children, but Eliza passed away two years after giving birth to her fourth child in 1850. He then married Eliza R. Cartwright but they had no more children. When he died in 1885, The Inquirer and Mirror reported, “Thomas S. James who died Thursday at the age of seventy four years was a citizen of exemplary habits, and was highly respected in the community. His early life was passed in the whaling service, later he commanded various packets plying this port and larger seaport cities as far south as Baltimore. He subsequently was appointed first officer of the South Shoal lightship and upon the retirement of Captain George C. Gardner in 1872 was promoted to position of Captain, which he held for a period of almost ten years. When failing health compelled him to relinquish the position and retire from active life.”

According to a story collected by basket historian David Wood, weaver Mitchy Ray claimed that “Thomas S. James was the first man to return from a whaling voyage with baskets he had made in his spare time. They were deep bottomed, with vertical staves and flat wooden bottoms made from white oak; they had wooden handles that folded down when the baskets were not in use. Mitchy also said: as time went on, James found that he could make the baskets better if he used a wooden mold or form to weave over.” Whether this story is true or not, James influenced many weavers during his time aboard the South Shoal Lightship, including Andrew J. Sandsbury, Isaac Hamblin, Davis Hall, and others.