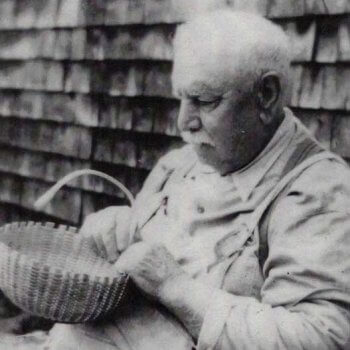 A house painter by trade, Ferdinand Sylvaro was a Nantucket native of Portuguese descent. He is thought to have learned basket making from his neighbor, A. D. Williams (who himself learned from William D. Appleton), and he even owned molds that had belonged to Davis Hall, famous for making baskets aboard the South Shoal Lightship. Sylvaro worked from a shop attached to his home at 97 Orange Street. He typically used oak or hickory for his staves and mahogany for his bases. One of his trademarks was inscribing three narrow, equally spaced circles inside of the bottom of his baskets.