Nantucket women have a long history in business, taking an active role in running island stores while many men were at sea. It’s unsurprising, then, that the person who transformed Macy’s into the first modern department store was a woman born and raised on Nantucket. As superintendent of Macy’s, Margaret Getchell was one of the first female executives in American retail, giving the store a competitive advantage in marketing to its largely female customer base.

Macy’s department store, founded by Nantucket native Rowland Hussey Macy, was the first modern department store in the United States, and, at one point, the world’s largest. It was also among the first to employ a female executive, something that’s still rare in retail today.

When he was fifteen, Macy sailed on the whaling ship Emily Morgan of New Bedford. It was during his whaling adventures that he had a red star tattooed on his hand which later became the emblem of his business. Deciding a life at sea was not for him, he opened four dry goods stores between 1843 and 1855 in California, Wisconsin, and Massachusetts. Having learned from the mistakes of his previous stores, he opened R. H. Macy Dry Goods at Sixth Avenue and 14th Street in New York in 1858, further north in Manhattan than other dry goods stores of the time.

In his book History of Macy’s of New York, 1858–1919, historian Ralph M. Hower claims that R. H. Macy attributed a large part of his success in New York to Margaret Getchell.

“While it was not at all unusual at this time to employ women in retail stores, to give one of them an executive position of such importance seems to have marked a radical departure from normal practice,” Mr Hower wrote.

Born in Nantucket on July 16, 1841, Margaret Swain Getchell graduated from Nantucket High School at 16. She spent several years teaching on the island as well as in Lansingburgh, New York; Lawrenceville, New Jersey; and finally in Richmond, Virginia. She left teaching sometime in 1861 when she moved north to New York City.

It is unclear if Macy was aware from the outset that Margaret Getchell was his kin —they were third cousins twice removed, sharing a common ancestor in Richard Macy (1689–1779)—when he first hired her in an entry-level clerk position. Her aptitude for numbers, as a former math teacher, led to her being promoted to bookkeeper in 1862. In this role, she was not only responsible for managing the store’s accounts but for training the “cash girls” as well.

Getchell was not content to just focus on the accounts. She regularly presented new ideas to Macy, and by 1866 had been promoted to superintendent, probably making her one of the first women to hold an executive position in American retail. In this role, she managed the store’s routine operations and its predominantly female staff. She is also credited with many of the store’s innovations, including: 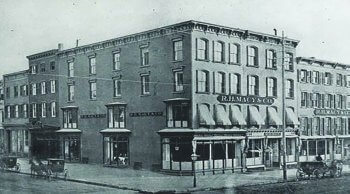 In June 1869, Getchell married Captain Abiel T. LaForge, a buyer at the store who had served with Macy’s son in the Union Army. LaForge had recently accepted a position at Macy’s as a lace buyer, in part, he revealed in a letter to his sister, because of his feelings for Getchell. Under her stewardship, Macy’s tripled in size, and in an undated letter, LaForge proudly wrote his sister: “She is the Superintendent, having full charge of the entire business; as we sell a million dollars worth of goods a year and have nearly two hundred employees, her position is a very responsible one. . . . Just think, nearly two hundred employees in one store!”

Despite her contributions to the store’s success, Margaret was asked to give up her salary in 1871 when her husband was promoted to partner. The LaForges rented an apartment above the store, and she continued to work there in an unpaid capacity. In 1873, while pregnant with her third child, she was left in charge of the store while her husband and Macy traveled to Europe on a three-month buying trip. The couple went on to have six children, and in her final years, she continued to work at the store part-time during inventory and busier periods.

Margaret Getchell LaForge died in 1880 at the age of 38, from a combination of ailments including heart failure and an inflammation of the ovary. Her husband died two years previous from tuberculosis. Although her life was short, Margaret Getchell’s impact in retail can still be felt today

“Be everywhere, do everything, and never forget to astonish the customer.”