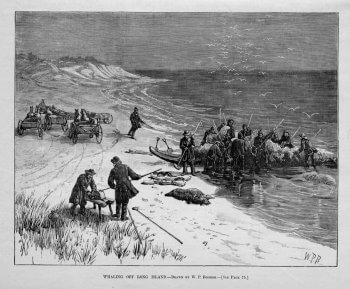 In the summer of 1672 the town offered two grants to off-islanders to contribute their special skills to the Nantucket Proprietorship. One offer was successful. John Gardner received his grant in return for bringing his vessel to Nantucket and setting up “the trade of fishing.” This would make it possible, among other things, for Nantucket to make shipments of fish to New York in lieu of taxes. Gardner and his brother Richard, the youngest of a family in Salem, Massachusetts, both relocated to the island and were soon major players in local politics.

The other offer was to veteran whaler James Loper of Southampton, Long Island. He was invited to Nantucket “to carry on a design of whale catching” and to bring John Savages, a cooper, with him.  According to the proposal Loper would be a one-third owner of the island’s whaling company, with the other two thirds held by Nantucketers. Savages did come to Nantucket and appears in the Barney Genealogical Record, but Loper did not accept the offer, perhaps because of the uncertainties attendant on the outbreak of King Philip’s War.

According to the Barney Genealogical Record, Ichabod Paddack (not Paddock), was born to Zacchariah Paddack and Deborah Sears Paddack of Yarmouth on Cape Cod. He had two brothers, Joseph and Nathaniel, and around 1690 the three brothers came to Nantucket. Joseph and Nathaniel married local women and settled down on the island, but Ichabod returned to Yarmouth, where he received a grant of common land in 1710. He lived until 1727 and died childless.

The Paddack brothers were real people, but beyond this, we know little about Ichabod. What remains to Nantucketers is a tale about a mythological whaler named “Ichabod Paddock,” his encounter with an alluring mermaid and the devil within the maw of a sperm whale, and the deadly power of a silver harpoon.

In sum, after a delayed start occasioned by King Philip’s War on the mainland, the Nantucketers—English and Wampanoag together—figured out on their own how to carry on off-shore whaling, and the rest is history.