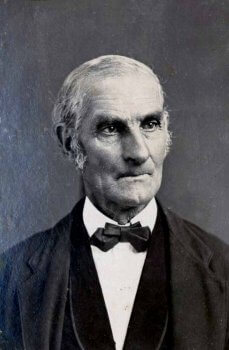 Whaling captain Edward C. Joy died in 1894. Born in 1806, Joy and his two brothers all served as whaling masters. As commander of the whale ship Lydia, Joy lost the ship to fire in 1835. Obed Macy recounted the story in The History of Nantucket: “Nothing remarkable occurred before the 31st of 1st month 1835 when…the ship was discovered to be on fire. The fire increased so rapidly that all attempts to extinguish it were unavailing. The crew left the ship in three boats about one and a half hour after the alarm having saved but very few things and in about one and a half hour got on board the bark Washington of Hudson, William Clark master, and went into Payta.”

According to Macy, the fire started in steerage between the decks and was first detected when it came through a hatch.

Joy also captained the Constitution from 1835 to 1839 and then retired to farm on Nantucket.