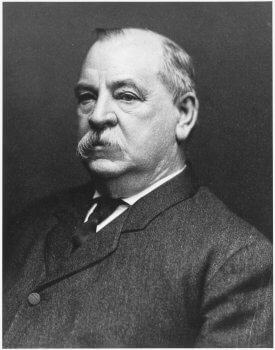 Former U.S. President Grover Cleveland visited Nantucket in 1897. After his second election to the presidency in 1892, President Cleveland established the first “summer White House” at the nearby Grey Gables mansion in Bourne, on Cape Cod. The president was seen frequently around Cape Cod fishing and sailing.

A June 12, 1897 item in the Inquirer & Mirror under the heading “Incog.” said Cleveland had visited Nantucket as a guest of Commander E.C. Benedict aboard the steamer yacht Oenida. Four years earlier, while still president, Cleveland had arranged for surgeons to turn the Oenida into a floating hospital and they removed a large tumor located above the roof of his mouth. The entire procedure was kept secret so as not to panic the nation.

On Nantucket, President Cleveland and Commander Benedict were given a private tour, and the newspaper noted no one would have known of the visit except that the party stopped to send a telegraph to Mrs. Cleveland.