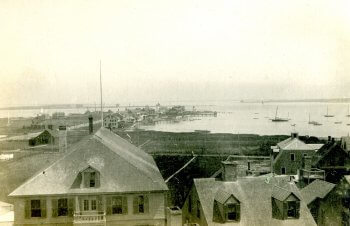 In 1924, town meeting voters set aside $1,500 to dredge the harbor near the Yacht Club, off Brant Point in front of the Steamship Authority pier, as well as around other small piers. The project had several objectives, including deepening the harbor to better allow small boats to anchor and re-using the dredged soil to fill in the marshes and improve Children’s Beach (pictured here).

The $16,000 project was jointly funded by the state, the town and private parties. On May 17, a Boston-based dredging boat arrived and the locals found its electric powered suction system intriguing. Previous dredging operations had involved digging with a clamshell or scoop-shaped implement. In the May 31 edition of the Inquirer & Mirror, the “Waterfront” columnist asked, “Have you been down to watch the dredger sucking up mud and sending it ashore through several hundred feet of pipe?”