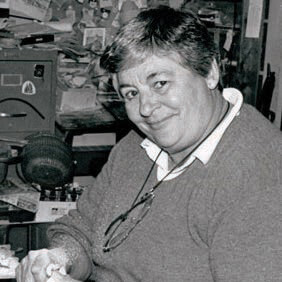 Born in 1931, scrimshander Nancy Chase, was a lifelong Nantucketer and descendent of whaling captains, carpenters, Chases and Coffins. She practiced her craft at her shop on Cobble Court (so named because her mother was picking up cobbles when she went into labor with Nancy) for over fifty years.

Learning to carve in wood while still a child, Chase took her first piece of ivory, a piece of whale jawbone given to her by her grandfather, and carved it into a map of Nantucket. The piece eventually graced the top of her mother’s lightship basket purse.

Her career truly began when William Coffin, owner of Coffin Pharmacy where Nancy was working as a soda jerk, asked her to carve ivory sperm whale pins to sell to tourists.

Years later, her carvings caught the eye of José Reyes, maker of the famous friendship basket purses with their scrimshaw decorations. Reyes approached Nancy to make 100 three-inch whales for the tops of his baskets. She agreed, eventually leaving her job at the Pacific National Bank to complete the order.

Deciding to turn her craft into a business, she opened Ivory Shop on Cobble Court with life-long friend Norma Minstrell. Known for the custom basket top ornaments she did for Reyes and other basket makers, her intricate carvings soon became favorites of tourists and lightship basket collectors. Some of her finest collaborations were with her sister, basket maker Susan Chase Ottison.

Tired of carving whales, Nancy was eager to try anything her clients could dream up. She carved everything from the usual maps of Nantucket and seagulls, to the exotic and whimsical. The latter included hippos that swim on the top of the basket lid while their tummies are seen underneath, a miniscule bouquet of daffodils, and a miniature tool box complete with a working set of tools. Beyond basket tops, Chase also carved everything from jewelry to figurines, cane tops to boxes. Today, Nancy is also remembered as the artist behind most of the ivory plaques and awards still given on the Island.

During the 1980 presidential election, Chase was commissioned to carve the Presidential seal to top a basket for future First Lady, Nancy Reagan. Mrs. Reagan was obviously pleased with the gift as she was photographed with the basket at a charity fundraiser in California.

Honoring her family’s long history on the island, Chase was deeply involved in her community. She was the first woman elected as bank trustee of the Nantucket Institute for Savings. She served on the boards of the Nantucket Lightship Basket Museum and the Nantucket Historical Association and as clerk of the Land Council for a number of years.