The Round Nantucket Basket from Basketry: the Nantucket Tradition 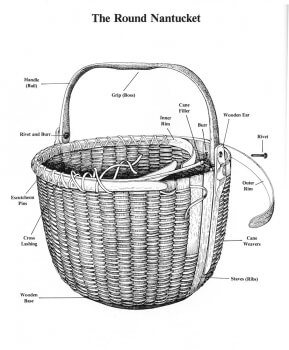 I believe that, at first, cane (often called rattan) a long vine-like plant imported from the South Pacific and commonly used for weaving chair seats was used mostly to repair the early splint baskets. Nantucket basket makers slowly incorporated the cane “weavers” as the key ingredient in their baskets. Before 1850 the splint cane was primarily used in the first several rows of weaving on the lower curved part of the splint basket. This area was most vulnerable to excessive wear and the Nantucketers found the use of cane the solution to this problem. Slowly, the use of the native wood splint was gradually eliminated and the baskets were eventually made almost entirely of split cane.

Before 1860, many of the baskets were made “free-form”. They were shaped without the use of a mold. These baskets have no center hole in the bottom board. Later, the hole was necessary to screw the bottom board to the mold. Also, there are known early examples where the one-piece bottom board was actually made of two round boards nailed together. Later, the bottom boards were hand-turned on a lathe and the same time a groove on the edge was provided to hold the staves. The term “staves” came from the coopering trade and they are the vertical elements of the basket upon which the horizontal “weavers” are woven.

The earliest baskets had bottom boards made of plain pine but later woods of maple, cherry and oak were beautifully lathe turned, often, with incised rings. The rims were made of heavier caning or bendable local woods such as hickory and ash. The carrying handles were usually made of hickory, oak, and woods that could be shaped and bent. Their sizes varied from about four inches to twenty inches in diameter and were either round or oval. There are no known sets or “nests” of baskets before 1860.