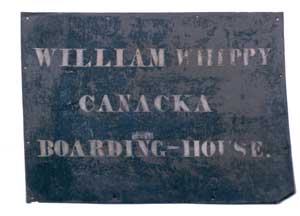 The manuscript collections in the Nantucket Historical Association Research Library contain a rich history of the more than three hundred Nantucket whaling voyages to Hawaii and the Native Hawaiian crewmen aboard. An examination of census records, property deeds, death and cemetery documents, and the journals and business accounts of local citizens provides a rare glimpse of native, or Kanaka, seamen in Nantucket in the mid-nineteenth century. Records of their employment aboard Nantucket whaleships appear in ship logs; consulate, shipping, and discharge papers; and in ship disbursement records and crew accounts. These details indicate that Native mariners left an enduring record of their ties to Nantucket and to the island’s whaling history, and provide a wealth of information about Nantucket’s perspectives on Pacific people and their cultures, and about their lives as native whalers.

Many of the Native Hawaiian seamen who arrived in Nantucket were named George, Jack, Joe, or Tom Canacker, Kanaka, Mowee, or Woahoo. Their given names remain lost to us because of the common practice among whaling captains of giving them English nicknames and surnames denoting their origins in the Sandwich Islands, an early name for the Hawaiian Islands. An 1834 editorial in the New Bedford Mercury defined “Canackers” for New England readers. “The term Canacker bears the same meaning as our English word man and is used by the natives to signify man, in general, and a man as distinguished from a woman or female. The present established mode of writing it is Kanaka, pronounced Kah nah kah, with the accent on the second syllable.”

For the Kanaka seamen, whose traditions did not include hunting whales, whaling life presented both challenges and benefits. On the one hand, their voyages exposed them to deleterious diseases, climates, working and living conditions, and to possible abandonment in a foreign port. On the other hand, the voyages gave them unparalleled opportunity to pursue adventure; to engage in cultural exchange with people from islands or shoreline communities of the Atlantic, Pacific, and Arctic oceans; and to acquire foreign goods and money.

Native Hawaiians brought their own traditions to the Nantucket whaling voyages, including ancient chants, stories, sayings, and proverbs describing their cultural connection to whales. In native oral traditions, whales sometimes carried boys and men on spiritual journeys to become religious leaders or priests.

Their chiefs claimed the rights to all whales that beached on their land, while taboos allowed only men to eat whale meat. Artisans fashioned ornaments, weapons, tools, and containers from the niho palaoa (whale teeth) and iwi (bones) of beached whales. The palaoa, or whale, is a body form of the god Kanaloa, one of the four major gods (Käne, Kü, Kanaloa, Lono) of ancient Hawaii. It brought the mana (spiritual power and knowledge) of Kanaloa to the artisan, the ornament, and the wearer. The palaoa gave the wearer authority to speak. Only high chiefs and chieftesses wore the sacred lei niho palaoa (whale-tooth necklace).

By the early 1820s, records show that whaling had linked the citizens of Nantucket with the citizens of the Sandwich Islands, where Nantucket whalers stopped to rest, to take on provisions, and to hire native seamen. As the number of whalers from New England increased, some even proposed to establish a consul at Owhyhee (island of Hawaii) to preserve American interests and influences and to aid and protect Native Hawaiians in their perceived advances in civilization and Christian teachings.

Local newspapers, including the Nantucket Inquirer, Nantucket Journal, and the Nantucket Mirror, routinely carried stories about Native Hawaiian traditions and current events of social, economic, or political interest to Nantucket citizens. News stories about Pacific whaling activities often detailed the cultural and natural environs of the region. These narratives frequently mentioned the heathen behavior, dress, and manners of particular island inhabitants; deaths, desertions, drunken and unsavory behaviors and mutinies by whalers in foreign ports; and cannibalism and massacres in Fiji, Palau, the Marquesas, and elsewhere in southern Polynesia.

Many Nantucket captains, returning home from their Pacific whaling voyages, also recounted their Hawaiian adventures. Some brought back objects of Hawaiian manufacture as well as Native Hawaiian seamen. Captains Edmund Gardner, of the New Bedford ship Balaena, and Elisha Folger, of the Nantucket ship Equator, wrote the earliest stories of whaling in Hawaii. Gardner’s published journal gives us an interesting insight into the ships’ crews hunting a whale in Kealakekua Bay, off the island of Hawaii.

According to Gardner, they arrived in September 1819, and found the islanders friendly and eager to trade. Among them was a young Native Hawaiian who spoke English, which he had learned while attending school in Boston.

After being at Kealakekua Bay for a week, and learning that Native Hawaiian traders had spotted a large sperm whale, Captains Gardner and Folger each sent two whaleboats in pursuit. Hours later, Native Hawaiians in more than fifty canoes helped tow the dead whale to the ships. The next day, hundreds of Native Hawaiians watched as the whalers stripped the blubber. They “commenced (with our leave) to tear off the lean from the carcass and fill their canoes as fast as they could tear it off,” Gardner wrote.“They had a great festival from what they got from the whale.”

While at Maui, two Native Hawaiians joined the ship Balaena: Joe Bal and Jack Ena, named by Gardner after the ship, disembarked in New Bedford in 1820. Six months later, returning home in the Baleana with clothing “sufficient for three years,” Joe and Jack left the ship once they reached Maui. With the desertion of another seaman, Captain Gardner chose four Native Hawaiian replacements—“two natives from Mowee, one from Woahoo and one from Onehow.” The names he “gave them were Henry Harmony, George Germaine, John Jovel, and Sam How.”

Other Native Hawaiians landed in Nantucket, New Bedford, and nearby ports almost immediately after Joe and Jack. They came as whalers or as students who attended the island’s Sabbath school. Within a few years, over fifty “natives of the South Sea Islands” reportedly served aboard Nantucket whaleships. By the 1830s, Nantucket whalers employed about fourteen hundred seamen, including Native Hawaiians and Pacific Islanders. Four or five hundred men arrived or departed annually.

An unknown number of the Hawaiians attended local schools or temporarily resided in town with local families. Some ill or destitute mariners found support in the asylum at Quaise, while the majority stayed in boarding houses run by single, married, and widowed women and men. Rooming exposed foreign seamen to Nantucket family life while providing residents with supplemental income.

According to the records, in 1822, three of the “Heathen Youth” aboard an outbound whaler formerly attended the Sabbath School at the First Congregational Church. That year, the Nantucket Inquirer reported “7 natives of the Sandwich Islands” at the school, while the Boston Recorder indicated “twenty Society or Sandwich Islanders” in attendance. Two years later, Henry Attvoi (or Attooi) left for a whaling cruise aboard the Nantucket ship Oeno; he probably lived in the largely nonwhite section of town called New Guinea before his Oeno voyage began.

In 1830, Jack and Harry lived in Newtown in the household of John and Elizabeth Gordon (or Gorden). Their “alien” status and ages, 18 and 19, respectively, appear in several versions of the local 1830 Nantucket census, while their Sandwich Island birthplace appears in only one version. The 1830 U. S. census for Nantucket confirms them as residing in the John Gordon household and their status of alien, black males, between the ages of 10 and 23.

At least six sailor boarding houses operated during the 1820 to 1860 period when Native Hawaiian seamen frequented Nantucket. Among the proprietors of those establishments were Absalom Boston, Mrs. Elkins, Alexander Wheeler, Wesley Berry, and James W. Denison [Dennison]. At least one house, near Pleasant Street in Nantucket’s New Guinea section, primarily or exclusively boarded Hawaiians and Pacific Islanders, and a sign identified William Whippy’s establishment as the “WILLIAM WHIPPY CANACKA BOARDING-HOUSE.”

As early as 1838, several citizens had espoused the need for erecting a “seamen’s bethel” [A designated place of worship for seamen.—Ed.] in Nantucket. They expressed particular concern about the deplorable number of “grog-shops of the worst description” and their detrimental effects on the morals of sailors and of whaling voyages. They reported that a woman operating a sailor’s boarding house “where a sailor finds no temptation” may soon “abandon her commendable enterprise” because “she was so severely tired” her seamen boarders find liquor elsewhere. Although possibly taking in a few sailors, other boarding houses primarily catered to “gentlemen” travelers. Proprietors of those lodgings included Betsey Swain Cary, Samuel Cary, Anna Smith, Susan Gardner, and Mrs. Barney.

Of the several Kanaka mariners known to have resided at Quaise Asylum, at least two died there of unknown causes. John Canaka died on October 24, 1836, and John President “Canacker” on August 4, 1840. Several who probably boarded in the New Guinea section of town also died far from home. On February 26, 1832, the body of a Kanaka whaler who had “sailed around Cape Horn” was found on the North Shore “beneath Coffin’s barn.” Another died on November 24, 1836, and was buried in Newtown. A notice of his death described him as a 21-year old “Sandwich Island Canackar.” Consumption killed four Hawaii-born men—Joseph Dix (age 26) on June 26, 1843; James Swain, a 27-year old from a “S. Sea Island,” on July 17, 1844; and Thomas Clay (age 31) on February 25, 1848. John Smith died of typhus (also called “prison fever” or “ship fever”), transmitted by vermin, at the age of 30 on March 20, 1848.

Census records, crew lists, and crew accounts supplement this anecdotal evidence of Native Hawaiian seamen in Nantucket or aboard Nantucket whaleships. The enumeration of 793 nonresident mariners or seamen in the 1840 census and another 593 in that of 1850 suggests that the Nantucket community viewed these men as extended family. This familial status could reflect the community’s significant socioeconomic ties to these mariners in sustaining their whaling livelihood.

These whalers, on countless other Nantucket voyages with Hawaiian crews, contributed to the economic and social history of this small island community. They shared their cultural traditions, languages, skills, and knowledge with Nantucket’s citizens and with each other aboard the island’s whaleships.

Susan A. Lebo, Ph.D., received her doctorate in Anthropology from the University of Washington, Seattle, in 1992, and was the recipient of the NHA’s Verney Fellowship in 2004. She is an adjunct faculty member at the University of Hawaii-West O‘ahu, and an independent researcher studying native Hawaiian and Polynesian whalers in the nineteenth-century New England fleets. note: Restrictions of space prevented the printing of some statistical materials and documentation. Dr. Lebo’s full text is available as Research Paper No. 124 in the NHA Research Library.