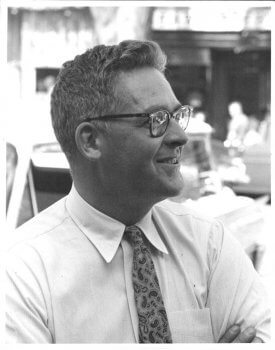 Nantucket businessman and heir to the S&H Green Stamp fortune, Walter Beinecke Jr., had lunch with President Lyndon B. Johnson in 1968 to discuss historic preservation.

Beinecke combined business and historic preservation on Nantucket by purchasing and restoring the waterfront and much of the downtown in the late 1960s. A lifelong summer resident, Beinecke’s philosophy was to create a tourist destination for the wealthy.

In 1968, he told Time magazine his plan was to attract fewer people who would buy six postcards and two hot dogs and more who would rent a hotel room and buy a couple sports coats. Beinecke’s philosophy and methods, often called elitist, were controversial but ended up creating the blueprint for the island’s economy well into the twenty-first century.

Born in 1918, Beinecke left school at age fifteen to join the merchant marines. He never finished high school or attended college but worked at many corporate jobs. He died in 2004 at age eighty-six.