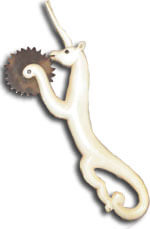 Pie crimpers are devices for adding a decorative edge to a pie crust. They are sometimes called jagging wheels, after the toothed wheels that form the working part of the tool. Scrimshanders often carved pie crimpers in fantastical shapes, including unicorns, snakes, and sea monsters. This beautifully carved  pie crimper depicts a bicorn (two horned) horse with detailed eyes, ears, mouth, and a swirling tail joined to the creature’s rear feet.