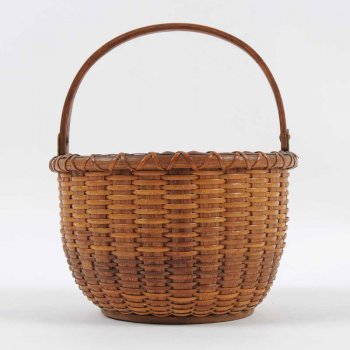 Rowland Folger stands as one of the earliest identified makers of rattan baskets in the style now known as the Nantucket lightship basket. A son of island polymath Walter Folger Jr. (1765–1849) and Anna Ray (1764–1844), he may have made a whaling voyage in his youth, but that is unclear. He published a notice in the Nantucket Inquirer in December 1823 advertising “All kinds of ivory work; umbrellas, and bellows made and repaired; combs mended by the subscriber; at the shop near the dwelling house of Walter Folger Jr.” and is identified variously through his life by the U.S. Census as a “jail keeper,” “printer and paper hanger,” and “basket maker.” Folger was never connected to any of the island’s lightships, but produced his baskets ashore for sale in his own store. In a assessment by historian Stuart Frank published in this magazine in 2016, “Rowland Folger’s baskets were woven by an enterprising businessman who was deeply rooted and broadly connected to the mainstream of Nantucket social, commercial, and intellectual circles; unlike the isolated crews sequestered on lightships, Folger had daily contact and interactions with all kinds of folks on the island, and daily experienced the ebb and flow of island affairs. This signifies that Nantucket baskets are even more truly representative of the unique circumstances and cultural effervescence of Nantucket down through almost two centuries.”