The intricately made scrimshaw swift is a grand, eye-catching device, a masterpiece of folk art. Even the simplest and plainest ones are truly showstoppers in any room. People visiting my shop ask me several times a day “what they are used for” and “what are they called?” Both are great questions, but before answering I always counter by first asking them to give it a serious think and take a guess. They are conveniently always wrong, and a lively discussion follows on their use. The most common guesses include a rack for drying clothes (!), candles or herbs, or perhaps a hat rack, or even a lamp shade. I have found the herb drying idea even promoted in print. The real answer of course is yarn winding. 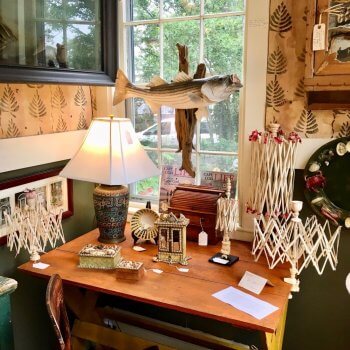 But as for their name, when asked “why are they called a swift” I have to confess that I do not know. I have never trusted the line invariably given by dealers, collectors and scholars: that obviously the device allows for yarn to be wound very swiftly, getting a tedious chore done quickly. I just didn’t buy it, and my doubts started me on the path of research for this article, originally just to answer that question… why a Swift? Well, of course, I soon had to tell the whole story.

Swifts have been called “the crowning glory of the scrimshaw-maker’s art.”1 Scrimshaw is of course the sailor’s folk art involving the hand carving and/or engraving of whale bone and teeth, baleen, and related materials. The early examples from the eighteenth century generally comprise tool handles, simple walking sticks, and inlaid boxes and devices. The best-known scrimshaw are of course the iconic sperm whale teeth with hand-engraved images; these did not appear until about 1820, after teeth lost their commercial value with the collapse of the South Seas trade in whales teeth (an important part of the China Trade), and whaling captains allowed their crews to keep the now-worthless by-product for their own diversion, idling away their spare time in scrimshanding. Surprisingly, swifts number among the earliest forms of scrimshaw and predate teeth: one of Nantucket Historical Association’s oldest documented pieces of scrimshaw is a small whale bone and ivory swift made by Joseph Wassons (1788).

One is amazed by the intricacy of a swift, whose complex design required such careful planning and precise craftsmanship. It was the most challenging of any form of scrimshaw, and so most often was the work of an experienced scrimshander or a ship’s officer.2 Even the simplest and plainest examples tended to encompass 100 or more individual parts.1, 2 There were many different handicrafts involved: the pan bone slats or ribs had to be sawn, cut, sliced and pieced together, to be tied and/or riveted; larger parts, such as the central spoke, hubs, finial, and table clamps, collars and screws, had to be carved, turned, and fitted. Everything had to fit together sturdily and function smoothly, opening and closing like an umbrella. In the fancier and more elaborate swifts, sailors added ornamentation, including ribbon ties, brass or copper rivets, scribed lines filled with ink or colored wax, coin silver dot inlay, engraved images, abalone or other shell inlay, baleen or ebony and other tropic woods as components or inlay.

Scrimshanding a swift was no light undertaking. Passages and references in whaler’s logbooks indicate that it would typically take two or three years to make a swift while at sea.1 There is evidence that sometimes it would take more than one voyage and would involve more than one artisan: for example, the captain or one of the ship’s mates might work on a swift, aided by the ship’s carpenter or cooper.3 The number of unfinished swifts found in old sea chests or ditty boxes, remaining only partially constructed or still only a collection of parts, bears silent witness to the tremendous effort and time commitment involved to make such a contraption. 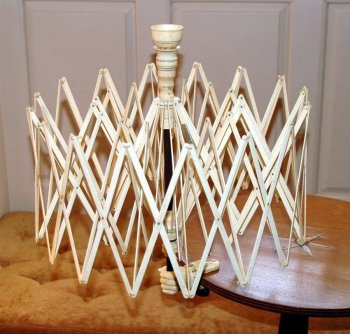 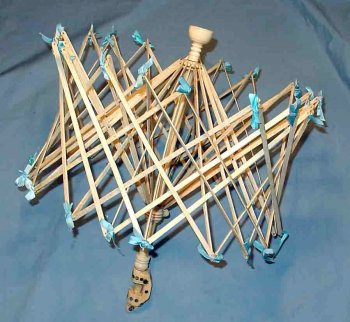 Sailors made different types of swifts. Most can be divided into comprising single or double cages (referring to the arrangement of the sets of hinged ribs). The Nantucket Historical Association even has one extremely rare triple-cage swift! They could be made to fasten onto the edge of a table via a screw clamp, or to be mounted onto the top of a sewing box or its own storage box, or occasionally made to be free standing on its own permanent stand. Swifts were also made in varying sizes: the smaller and more delicate ones were used for winding the fine strands used in lace work, while the largest ones were used for the heaviest yarn, such as would be used for knitting a thick sweater for a sailor.2

How, precisely, were they used? The cage was adjustable to hold any sized skein of yarn while it was unthreaded to hand-wind into a ball. Most often they are made with a cup finial on the top that could hold an unfinished ball if the winding was interrupted. The occasional swift is seen instead surmounted with a spire or pointed finial to spear the ball, holding it for the same purpose. Still others may be topped with another device, such as a pincushion. The umbrella swift was much more convenient and efficient to use than a niddy-noddy, distaff, or winding wheel (a spinner’s weasel) because it was self-contained and freely revolved to leave the yarn worker’s hands free to do their work; it was adjustable to easily fit any sized skein; and was collapsible to not take up unnecessary space when not in use.

The origin of swifts is uncertain and remains undocumented. Some have postulated that they are a New England invention, possibly by sailors themselves,1, 4 though wooden ones may have been precursors in the eighteenth century.1 Some have said that these “umbrella”-style swifts were a Shaker invention, although this does not appear possible since the first recorded Shaker manufacture of expandable/collapsible yarn swifts for sale was by village elders in the Hancock, N.H., community in the 1840s and continuing into the 1870s.5 We know that swifts are also made in France and Sweden, but we do not know how long ago they started, nor whether they are traditional or just copying the Yankee lead. The Amish are well known for making swifts, adjustable and collapsible, but of a different form than what we are discussing. Did their invention come first?

We just do not know the answer. But perhaps the strongest clue to the age and origin of the swift comes from the very name itself. Remember my initial quest…why is it called a swift? One source reports that the device was also formerly called a swiss,6 but unfortunately provides no supporting evidence. I think the report is innocently mistaken, the error arising from the haphazard spelling from centuries ago, and the unreliability of passed down oral histories. I think the answer lies in etymology. The word swift has different meanings. Yes, the modern meaning is rapid or quick. But…drumrolls…the word swift is descended from the Old English word swifan which in the mid-fifth- to mid-seventh-centuries meant “to revolve, sweep, wend, or intervene”; which itself was thought to have descended from the Proto-Indo-European word sweyp, which meant “to twist or wind around.”7 We certainly have here the answer to why it is called a swift, and also very strong evidence that the device far predates eighteenth-century New England.

No matter its origin, a swift was indeed “the crowning glory” among sailor’s scrimshaw. Years of devoted labor made this a very special gift, one not given lightly. This was a gift for a special person, a very close relation, in most cases a wife or fiancé, sometimes a mother, or very rarely a sister; one case is known where the gift was for a nurse who had cared for a loved one during their last days.8 Interestingly, because they took so long to make and were consequently only given to someone very close, most sailors only made a single swift (whereas a scrimshander might typically engrave many teeth or make several walking sticks or pie crimpers). As a result, the amazing swifts we see today are pretty much each unique, almost universally different from every other swift.1 A most wonderful folk art indeed.