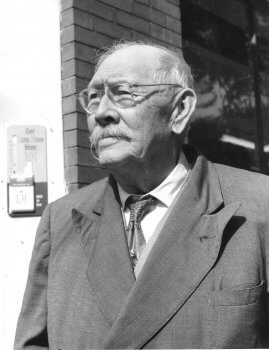 Austin Strong, step-grandson of Robert Louis Stevenson, playwright and founder of Nantucket’s famed “Rainbow Fleet,” died in 1952. Born in San Francisco in 1881, Strong spent his childhood in the South Pacific, first in Hawaii and later in Samoa. Austin and his parents lived with Robert Louis Stevenson in Samoa and the famed poet and writer of Treasure Island would sometimes help him with his schoolwork.

Strong wrote the successful Broadway plays The Drums of Oude and Seventh Heaven. On Nantucket, he created follies for Nantucket audiences and led campaigns against paving over the cobblestones on Main Street and prohibiting cars on the island. Strong created a sailing school on Nantucket for his many nieces and nephews, as well as the Gilbraith children, who were made famous in the book Cheaper by the Dozen. The school was called the Rainbow Fleet and was established in a wharf shack.