Jonas Peter Akins teaches at Choate Rosemary Hall in Connecticut and, with Professor Tom Nicholas, is the author of the Harvard Business School case study on the American whaling industry. 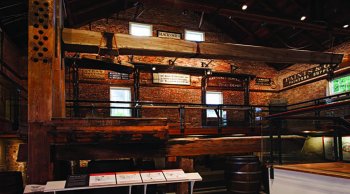 In the golden age of American whaling, while the enterprise was dependent on dangerous and often bloody manual labor, the financial arrangements were decidedly advanced. In many ways the compensation and funding structures were precursors of a crucial component of today’s economy because the voyages of America’s whaling fleet were financed in a manner that is largely indistinguishable from the venture capital industry of today, more than a century before the term “venture capital” was first used by a firm. Crewmembers were compensated with shares of the final proceeds of the voyage, which could be considered an early form of stock options, and whaling agents functioned as both raisers and allocators of capital, much like the general partners of a venture capital fund. In this way, the incentives of all those involved in the enterprise, from the African-American greenhand from Boston and the harpooner from Gay Head all the way to the mates, captain, and owners from Nantucket, were aligned. All of these innovations appear to have developed organically, without a central organizing authority, providing a fascinating natural experiment in the evolution of financing and control for risky enterprises.

Following longstanding indigenous practices, the Plymouth and Massachusetts Bay colonies both enacted statutes governing the distribution of whales that washed ashore, though by the end of the seventeenth century coastal towns in New England had begun to organize whaling crews to pursue whales spotted from shore. Nantucketers learned drift whaling from the island’s native Wampanoags, and then contracted with James Loper in 1672 followed by Ichabod Paddock of Yarmouth in 1690 to learn shore whaling. Although research continues at the Nantucket Historical Association into the particulars of Loper’s and Paddock’s contracts, it seems likely that they were paid at least a share of their total catch instead of a simple salary. This inshore whaling continued until around 1712, when a Captain Hussey was, according to local tradition, blown out to sea while pursuing right whales and into a pod of sperm whales, one of which he promptly killed, towed to shore, and cut up and tried out. From this beginning, Nantucket developed over half a century into the pre-eminent whaling port in America. Its dominance was disrupted by the American Revolution and the War of 1812, sparking a gradual removal of whaling capital and labor to the Quaker settlement of New Bedford, on the banks of the Acushnet River in southeastern Massachusetts.

It was there that, in 1841, Herman Melville signed on to a voyage of the Acushnet, under Captain Valentine Pease of Edgartown on Martha’s Vineyard, for 1/175th of the eventual proceeds. The system of lays, wherein members of the crew received a portion of the voyage’s profits, is remarkably similar to the stock options with which many modern startup employees are compensated. As it happened, Melville deserted from Acushnet in the Marquesas Islands and never collected on his share of the proceeds, but he wasn’t done worrying about lays. Ishmael, the narrator of Melville’s Moby-Dick, having made his way from New Bedford to Nantucket, asked Quaker ship owners Peleg and Bildad for a 1/275th lay. They countered with 1/777th, and Ishmael finally agreed to 1/300th before shipping out with Captain Ahab. Aboard both the Acushnet and the Pequod, the employee was not working for a wage but for a share of the overall success of the voyage. In fact, the accounting of the day made it so that lays were paid out of something that approximated free cash flow, the same financial construct that underpins modern stock options. Instead of a vesting period, many nineteenth-century voyages lasted for three to five years, and it was not possible for a crewman to exercise his option, by collecting his lay, before the ship returned to port.

The individuals who organized these voyages, the whaling agents, functioned much like venture capital firms of today.  Although they raised most of their money from wealthy individuals, there are many records of blacksmiths and shopkeepers investing their savings with agents, in hopes of healthy returns. In pooling the capital of many members of the community and allocating it across multiple risky ventures, the agents filled an important role, not only for financing the voyages, but also for diversifying the risks that their investors faced.

Although many agents only managed a few voyages before leaving the agent business, those who managed multiple voyages at once became quite specialized and would contract with shipping agents to find members of the crew, though the whaling agents would select the captain and most of the mates, in much the same way that a VC firm today helps to select the executives at a startup, while leaving the employment decisions to others. In many cases, mates moved up the ranks within the ecosystem of an agent’s voyages, and some captains, especially after a particularly “greasy” voyage, put money in their pockets and, began taking a share of other voyages with their agent, in much the same way that entrepreneurs now transition to become investors. Finally, the agents provided a degree of guidance and advice to new captains that still speaks to those charged with running high risk ventures today. Charles W. Morgan, after whom the last remaining wooden whaleship was named, wrote to George H. Dexter on the occasion of his taking command of Condor in 1834:

The greatest difficulty I have observed with young Masters, is either too great indulgence or too great severity towards their crew. Discipline must be effectual, be administered with a steady hand especially among Sailors, and there is no station which requires more guard over the temper, than that of a master of a Ship. And on your first voyage depends in a great measure your future success in life. Let me then beg of you to keep a strict watch over the moral conduct of your crew, never permit your authority to be abused or set at naught, but at the same time never to use undue severity yourself or permit it in your officers.

Although there are some notable differences between the two financing models, including the facts that unsuccessful whaling captains were rarely rewarded with further investment and that single agents often organized voyages, where VC firms generally shy away from being the sole investor in a startup, the lay/agent model is a clear preview of the stock option/venture capitalist structure of today. Whaling was one of America’s first global industries, so it is worth considering the way in which it functioned, particularly as its structure appears to live on in the startups that dominate much of the discussion about America’s economic future.