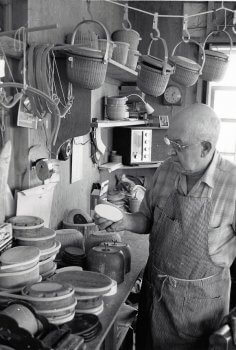 Stephen Gibbs and his wife Loretta operated a basket shop for 20 years where they made and sold lightship baskets. The shop was located at the rear of his brother-in-law’s house on Madaket Road. The couple also ran a small bed and breakfast out of the house he was raised in to supplement their income. This house is located on the corner of Ash Lane and North Water Street. Prior to his basket work Stephen Gibbs was an accomplished woodworker and builder on Nantucket, giving him the knowledge to make all of the components for his baskets. After he suffered a heart attack, he turned to the less physical work of making Nantucket baskets, with general focus on ladies handbags.

Although it is said that Stephen Gibbs is mainly a self taught Nantucket basket maker, he was introduced to basketry when as a small boy Stephen’s mother had him bring supper to Mitchy Ray, once in a while. Mitchy Ray was a well known island character, as well as a third generation Nantucket basket maker, whose neighbors were accustomed to looking after the confirmed bachelor. 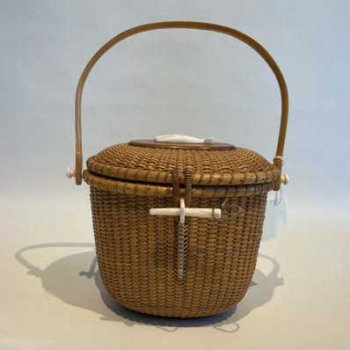 Stephen Gibbs wove baskets for 20 years from 1954 until he passed away in 1974; his baskets are among the finest woven and highest quality of this time period. Mr. Gibbs used oak for his staves and frequently placed a long ivory clasp to hold the peg on his purses. This clasp has become a trademark of a Gibbs baskets. Stephen Gibbs’ nephew, Douglas Porschet, has been quoted as saying, “they were always two years behind in orders.” Some would call a Gibbs basket indestructible. Ask any current weaver who has completed a repair on one of Mr. Gibbs’ baskets!