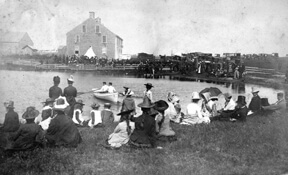 Quaise, meaning the “end point” in Algonquian, is anisolated area three miles northeast of Nantucket town. Very little haschanged there since the nineteenth century when an experimental town poor farm and asylum were located there. Yet the silence and barrenness of the area betray the phantom screams of asylum inmates who perished in the flames of an 1844 poorhouse fire. Fifty-nine bedridden, insane, and pauper inmates and their “keeper” slept in the asylum the night of Wednesday, February 21, 1844. Frederick Chase, one of the indigent inmates, was the first to discover the acrid smell of smoke coming from the cook-room on the lower level of the three-story structure at 2:00 a.m. Ten inmates were burned to death. The fire raises a host of questions, chiefly, why were there inmates at Quaise? 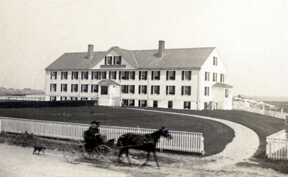 Sources:
Some of the resources consulted for this article include the minutes of Nantucket Town Meetings, records of the Poor Department, the NHA’s collection of Poor Farm/Quaise Asylum papers 1839-41, and the town censuses of 1830, 1837, 1840, and 1850. Byers, Edward, The Nation of Nantucket: Society and Politics in an Early American Commercial Center, 1660-1820.Hunter, John M., “Need and Demand for Mental Health Care: Massachusetts 1854,” Geographical Review, 1987.”Remarks at the Asylum at Quaise” by Alexander Coffin, 1839-1841.Rothman, David J., The Discovery of the Asylum.”The Quaise Farm Horror of 1844: Burning of the Asylum,” Historic Nantucket, 1977.

Alison M. Gavin, the NHA’s 2003 E. Geoffrey and Elizabeth Thayer Verney Fellow, is now a writer/editor for the National Archives and Records Administration in Washington, D.C.

The asylum building shown here after being moved to Lower Orange Street where it functioned as Our Island Home, and in 1986 became Landmark House.