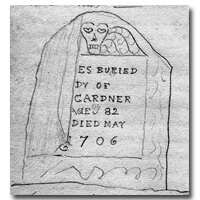 Occasionally a visitor will ask to see something in the NHA Research Library that rarely sees the light of day. Such is the case with the diary of Charles Dyer’s trips to Nantucket in 1846 and 1869. After our researcher finished with his (her) project, I found myself drawn to the pages of this old, remarkable manuscript. It is written from a visitor’s perspective and captures life on Nantucket in the nineteenth century in a matter-of-fact manner. After I put it down, I couldn’t help thinking how different his view of Nantucket was from ours today.

Charles Dyer’s mother (Mary Coleman) was born on Nantucket, and while he did not live here, he had many relations and friends on the island. In his diary he records summer visits that lasted about a week each. During each stay, he spends time seeing the sights and apparently talking to as many people as possible. His diary is filled not only the details of his adventures but also with his wry comments. On the architecture of the island, Dyer notes that there were “ancient houses fronting the south without any reference to the road.” He is referring to the habit of our founder’s building their lean-to, or saltbox, houses facing south, rather than with their front door facing the road as we would today. Some of these houses remain today and are easy to spot amid the more modern houses, once you start looking.

Dyer was also interested in history and often mentions the stories he heard. He spent time looking at old records and visiting with the older inhabitants of the island. He walked through the early settlement of Old Sherborne several times and writes of seeing the cellars of the old houses. He even sat on one of the foundation stones of the house where his mother was born. Today, the exact location of these early houses is mainly conjecture, and a subject of thorough research by island architect Mark Avery, among others.

Charles also visited several burying grounds. In the founder’s cemetery, he reports that there was only one stone, that of John Gardner, who died in 1706. (Today there exists only a replica of the original stone, along with a monument listing the male proprietors.) He laments that the stone had been defaced and takes time to draw it in his diary. He also mentions a visit to the Indian Burial Ground one mile outside of town and reports that it was routinely robbed of bones. Unlike today, such burial grounds were not protected by the law.

Continuing his tours around the island, in Madaket he saw the “whale rock around which Grandmother Coleman used to swim till one of the company was drowned, which put a stop to the girls going in swimming.” The location of this rock remains a mystery. Siasconset was, according to Dyer, “about 150 houses most or which were not worth more than $100 a piece.” He also writes that they were “mostly used in summer.”

Finally, Charles makes a general note about Nantucketers’ character: “Another trait of character which no one can mistake or dispute is that whenever one goes among them if he can show any Nantucket Blood in his veins he is received as one of OUR people and is acknowledged as a cousin even to the 4th or 5th generation. But if he is no extract from Nantucket he is a stranger and is spoken of as such and called a stranger even in their public records – unless indeed he connects by marriage with them – then they will own him.” Sound familiar?

The diary was a satisfying find and I’m grateful to the researcher who recently requested to view it. Charles Dyer’s records are that of a cultural tourist who looked deeper into life on Nantucket and made comments and comparisons across time and with other ways of life. Because he valued Nantucket’s differences and history, his examination was more than that of a tourist. We’re lucky to have such a thoughtful recording of his trips in our collection.

Originally published in the “Keeping History” column of the Inquirer & Mirror, summer of 2004, by Georgen Charnes.