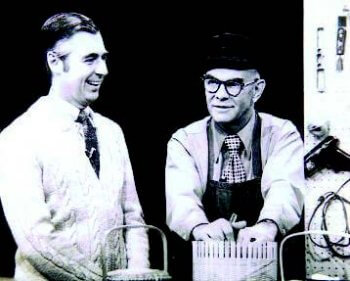 One of Nantucket’s best known lightship basket makers wasn’t a native islander. Walter “Brownie” Brown was born in 1915 and raised in Saugus, in the north shore region of Massachusetts. He first visited Nantucket around the time of his marriage to Priscilla Eisenhaure in 1940. Brownie and Priscilla had four children: Martin, Gerald, Judith and Christine, eventually settling in Lynnfield, Massachusetts, where Brownie worked as a machinist for General Electric. As his family grew, they began to spend more and more time on Nantucket.

Their first summer home was a primitive house on Tuckernuck Island, which had no indoor plumbing or electricity. An avid pilot who owned his own planes, Brownie would fly the family in and out using a grassy field as an airstrip. They eventually settled in a house in Madaket known as “Samoset.”

In 1967, basket maker Paul Whitten told Walter about a recent interview he had conducted of famed basket maker José Reyes. As someone who had always loved working with his hands, Brownie listened with interest as Paul described José’s basket making techniques.

Using his mechanical skills, it wasn’t long before he was able to replicate the process for making a lightship basket. Starting with a basic knowledge of what was required, Brownie made his own molds and researched the best New England woods to use for bases, handles and staves. Over the winter months, Brownie would cut down white oak trees near his home in Lynnfield. Once he had learned all the necessary carpentry skills to make baskets, he set out to master the art of ivory carving so that he could add his own embellishments to the tops.

Upon his retirement from General Electric Riverworks in 1975, Walter opened Cross Rip Crafts, named after the Cross Rip Lightship that he passed every summer on the ferry to Nantucket. From his home in Madaket, he sold many different styles of lightship baskets and ivory carvings.

In 1975, Walter made an appearance on the PBS program Mister Rogers’ Neighborhood, with his Madaket neighbor, Fred Rogers. On the episode, he shows how a lightship basket is made, from cutting down the tree to adding the finishing touches. He also displays the strength of a well-made basket by doing a handstand on a purse.

Walter passed away in 2009. His self-taught hobby led to a legacy of innovative basket making and ivory carving that, through several generations, continues to thrive.