Snake Alley is a grassy way down into the Lily Pond from Lily Street.  It is the extension of the alley (once known as Break Neck Alley) that runs down to Lily Street from Academy Hill Apartments. These days it belongs to the Land Bank. 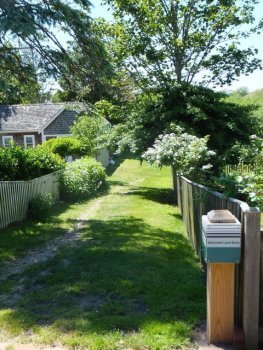 When Quince Street was opened in 1719, it was Crown Court, and that name has been retained for the bit of it on the west side of Westminster Street. On some maps it appears that the whole way from Quince Street past the south side of the former school building to Lily Street is considered to be Crown Court, but even that stops short of Snake Alley.

Like Stone Alley, Snake Alley does not appear in Assessor Isaac Coffin’s 1799 list of streets in Nantucket. Merle Turner does not mention it in her 1929 essay on Nantucket’s half-forgotten lanes and alleys. In fact, the name Snake Alley does not turn up in official records or in the Inquirer and Mirror before 1980, when it is mentioned among the bounds of the Academy Hill School property that the town was about to lease out for conversion to the Academy Hill Apartments. Subsequently, the name appears in some Land Court records.

Snake Alley and its upper part are unnamed but described by Alliston Greene—born in 1866—in his reminiscence of his Nantucket boyhood when the boys from the school would never miss a chance to rush down “the lane at the south of the yard onto the pond” to get in a few minutes of wintertime ice skating.

With so little documentation, how can Snake Alley even be said to exist?  Purely because that is what generations of North Shore residents have called it. When and why they started doing so, remains a mystery.