Nantucket experienced deaths in the 1918 influenza pandemic, but by far the most lethal infectious disease to strike the island happened in the mid-1700s.

Beginning in the fall of 1763 and continuing on into the new year of 1764, something horrific happened to Nantucket’s native Wampanoags. Only since 1988 has the site of the tragedy been marked in a low-key sort of way. On the west side of Surfside Road, outbound toward the south shore, just beyond Miacomet Road, lies a fenced open field.  In late spring and summer it is often filled with yellow flowers, putting on a cheery face at odds with its history.  The only identifying marker is a roadside boulder inscribed with the words “Miacomet Indian Burial Ground.” It has been suggested that there should be more informative signage and that educational field trips should be arranged for Nantucket students and visitors to the island.  Wampanoag elders from Martha’s Vineyard and Cape Cod prefer, however, that the place be left in peace. 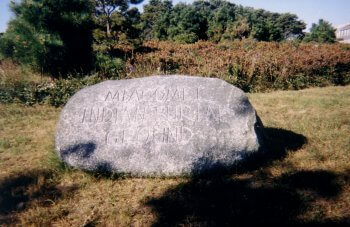 In this field were interred the victims of the epidemic that worked its way through the Wampanoag village of Miacomet during that fatal winter. Before Wampanoag laundress Mary Norquata died of it, she had brought the pathogen home to Miacomet, and by the time the epidemic wound down, it had taken the lives of over two hundred Wampanoags.  In 1890, a list of the names of the victims came to light, written into an old Bible.  From this list it appears that about two thirds of the people who died were women and children.

Whole families were wiped out.  Wampanoag Tom Never is commemorated in the place name Tom Nevers Head, but after 1764 there was no living person to carry on the surname.  Seven members of the Never family died in the epidemic.  Likewise the Poppoma family lost seven members, as did the family descended from weaver Jeremiah Netowa. The family losing the most members, nine in all, was the Spotso family, descended from Sachem Spoospotswa and Queen Sachem Askammaboo. Of the descendants of the Indian Justice Corduda, five died. The Chegin family also lost five, as did the Micah family and the Panchame family.  Four members of the Tashama family, whose name lives on as Tashama Farm, succumbed. The list goes on.

There was constant travel back and forth between Nantucket and the mainland, and this travel transmitted the epidemic off-island.  A Wampanoag woman from Nantucket carried the infection to Mashpee, the Wampanoag town on Cape Cod, and communicated it to a local resident before she died and was buried in a wigwam there.  Sam Pocknett of Mashpee picked up the disease on a visit to Nantucket and took it home as well. The disease also reached Martha’s Vineyard, where fifty-two Wampanoags were infected, and twenty-nine died. Nowhere, however, were there so many deaths as at Miacomet.

Ironically, however hateful it might have seemed, being a servant in an English household proved to be protective. Whatever the vector of the deadly disease may have been, it traveled neither by human breath nor by insect wings.  From Miacomet to Sherburne (as the English town was called at that time) it spread not at all. The English families remained untouched, and so did the Wampanoag boys and girls reluctantly living as servants in their households.

When the epidemic finally burned itself out, fewer than a hundred and fifty Wampanoags were left alive on Nantucket.  Some had been sick and recovered.  Six who lived at Madaket had escaped unscathed.  Some men had been at sea on whaling vessels and returned to find their wives and children dead and gone, and some had survived in the mysterious safety of English homes.