The phrenology craze of the first half of the 1800s swept Nantucket in the 1830s. A series of phrenology lectures were initiated in the Atheneum in 1835, and a local Phrenology Society was formed.

Phrenology was the practice of predicting a person’s character by “reading” the person’s skull. Model heads with labeled maps of the supposed areas of such qualities as Amativeness, Approbativeness, Alimentiveness, Combativeness, Ideality, and Secretiveness, to name a few, were available as guides. 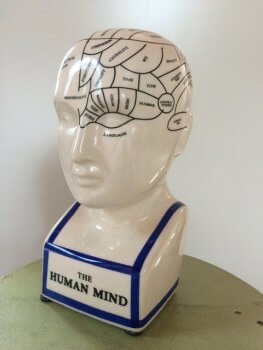 Both the skulls of deceased people and the heads of the living were fair game for phrenological reading. Of particular interest were skulls of famous individuals and of aboriginal people. On Nantucket the Miacomet Indian Burial Ground was raided for skulls of the victims of the 1763–64 “Indian Sickness” to be carried to meetings of the Phrenology Society.

The September 3, 1842, issue of the Inquirer and Mirror reported that the head of Abram Quary, one of the last of Nantucket’s native Wampanoags, had been read. Quary lived until 1854, so he had in life permitted visiting phrenologists to run their hands over his head. The report stated that in many respects, Quary’s skull revealed “the peculiar characteristics of the Indian Race,” but in one way he differed, in that his “organ of Secretiveness” was “very weak.” The local phrenologists predicted that he would have “a very good memory of events, of localities, of persons, and of narratives.”

A series of letters appeared in the Nantucket Inquirer in the mid-1830s debunking the notion that anything about the nature of a person’s moral character could be determined from the exterior contours of the head. They were signed “M.” and may have been written either by Maria Mitchell, librarian of the Atheneum, or by her father, William Mitchell.

The Nantucket Historical Association’s Museum shop carries miniature phrenological heads: a large one replicating a model created by L. N. Fowler, Ludgate Circus, London, and a small one labeled “The Human Mind” with a slot for use as a bank.

For more about phrenology on Nantucket, see Frances Karttunen’s book, The Other Islanders: People Who Pulled Nantucket’s Oars, available from the NHA Museum Shop and from Spinner Publications of New Bedford.