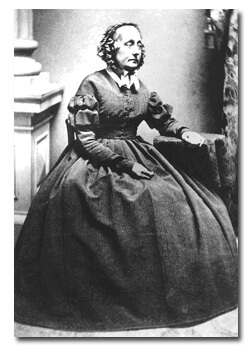 Eliza Barney filled volume after volume with a neat hand and assiduous accuracy, documenting the family trees of islanders from the first Proprietors through their global offspring late into the 1800s. But who was she? Was she a lonely Quaker spinster with nothing else to occupy her days? Or the town “registrar”? Or someone who was fulfilling someone else’s mandate? Or was she a widow with intellectual vigor and time on her hands?

In fact, Eliza Barney was a wife, a mother, an ardent Quaker with foresighted beliefs in women’s rights, temperance, and abolition. She was a self-taught botanist and entomologist, so respected in those fields that her obituary says she was “justly to be considered an authority for the rising generation.” And this interest would also creep into her genealogical record, as in the notation that an island man died “from a spider.” Her love of natural history, including all aspects of agriculture, was matched only by her love of history. She was, for her day, a proper “buff,” enjoying research, an inclination that made her perfectly suited to become the island’s foremost genealogist.

Born April 9, 1802, Eliza Starbuck was the third of ten children born to Joseph and Sally Gardner Starbuck, three of whom “died young.” Joseph first met Sally Gardner while running an errand to her home when they were both fifteen. They were married on January 26, 1797, when both were twenty-three years old.

Eliza’s father would distinguish himself by becoming the island’s most successful businessman, a tycoon of the whaling era, making a fortune in whale oil. Starbuck had no interest in going to sea but was brilliant at making money. Early on, he demonstrated an acuity for business in his father’s counting house. His mind for detail and keeping books clearly were gifts passed on to his daughter. Powerfully rich for his day, he was fond of acknowledging his male progeny in fairly flashy ways. He named one of his whaleships “Three Brothers” after his three sons, George, Matthew, and William, and in 1835, at the age of sixty-one, he oversaw the construction of what we now call the “Three Bricks”-one for George, one for Matthew, and one for William. His daughters, being daughters, would have to depend on their husbands if they were ever to have such fine homes. But for his sons, only the best, and the best meant expensive, imported brick.

As it turned out, the girls did not fare too badly, either in choice of husband or eventual domicile. Eliza, for her part, married Nathaniel Barney in May of 1820, just after she had turned eighteen. He was ten years older and would, in 1869, predecease her by twenty years.

At their wedding, a distant cousin and Rhode Island silversmith named William Hadwen was among the guests. There, Hadwen first encountered Eunice Starbuck, Eliza’s sister, who perhaps was the reason he stayed on in Nantucket. Two years later, Hadwen would marry Eunice and cement a bond between the two couples that would be lifelong. So close was this friendship that the foursome shared a “double” house at 100 Main Street and the two men went into business together in 1829 as purveyors and manufacturers of oil and candles. Amazingly, they had a tryworks in their backyard there, where they probably rendered blubber or fat to extract oil. In 1849 they moved the business to Broad Street into an oil refinery and candle factory, now the Whaling Museum. The business thrived. In the meanwhile, Hadwen had two Greek Revival mansions built at 94 and 96 Main Street, the latter for himself and his wife and situated directly across the street from Eunice’s three brothers. Eunice and William were childless. Joseph Barney, Eliza’s first born, became a surrogate son, eventually inheriting both 96 Main Street and Hadwen’s summer cottage in ‘Sconset. Nathaniel Barney was brought up as a strict but liberal Quaker. He had acquired a good English education, the foundation for his early work as a teacher. When he married Eliza, who was hardly more than a girl, he had found his intellectual match but probably served in many respects as a teacher to her, too, possibly sharing with her her first tastes of temperance and abolitionist rhetoric. Barney’s Quakerism would also have provided the bedrock for Eliza’s passionate involvement in women’s suffrage.

As a mature woman, Eliza Barney made her home a hub of social, political, and intellectual thought, as well as where she raised their three children, Joseph, Sarah, and Jethro. Her husband’s deep involvement with the antislavery movement brought to her living room some of the movement’s brightest lights: William Lloyd Garrison, Frederick Douglass, Charles Sumner, and Horace Mann were all guests at 100 Main. In fact, Barney held stock in the New Bedford Railroad and for several years refused his share in the dividends because the railroad would not carry black passengers. Eventually, he gave all his dividends to Garrison for the movement. Another close friend and cousin was Lucretia Coffin, who had left Nantucket in 1804 and married James Mott before becoming one of America’s best known advocates for women’s suffrage. For years, the Motts and the Barneys carried on a long, thoughtful correspondence addressing all the pressing issues of their day.

For her part, Eliza’s role went well beyond simply entertaining distinguished guests in her home. She came to be known as an “agitator” for temperance, equal rights, and women’s suffrage. In 1839-40, she served as secretary to Nantucket’s Anti-Slavery Society. And, in the summer of 1851, she, her husband, and her daughter, Sarah, attended Massachusetts’ first women’s suffrage convention in Worcester. In a eulogy written not long after Eliza’s death in 1889, Anna Gardner, then president of the Suffrage League of Nantucket, remembered her for the practical and courageous example she set:

In thinking of the loss that the Suffrage Cause has sustained in the death of Eliza Barney, my mind has gone back to the time when we were first allowed to vote for School Committee, and how some of us . . . dreaded to go to the polls to deposit our vote on account of the ridicule and the sarcastic remarks that we thought were sure to be expressed by some of those who felt women were out of their sphere in so doing-we had for our leaders Eliza Barney, Elizabeth G. Macy and Harriet Pierce . . . we took courage, and thought with these three women to lead us, we could do anything.

Just when Eliza Barney began keeping the genealogy that is now a valuable resource of the Nantucket Historical Association’s research library is not known. In 1856, she inherited all of Benjamin Franklin Folger’s papers, including his own genealogical work. But did she go right to work? Perhaps she did get started right away, but there is also the possibility that the project waited for her to lead a quieter life.

Only a year before, in 1855, William Hadwen had retired and Nathaniel Barney brought his son Joseph, and son-in-law Alanson Swain into the firm in his place. Although there is evidence that Barney was still on Nantucket in 1857, the manufacturing of whale oil and candles must have been, by then, a losing proposition. At some point, just when is not known, Alanson Swain packed up his family and moved to Poughkeepsie. Nathaniel, who would have been sixty-five in 1857, and Eliza elected to join them, so they could be closer to their only daughter – again the exact date of their departure is not known. There is also some evidence that both men shared a great interest in railroads (Swain would help finance the Pennsylvania and Eastern Railroad in the 1870s and Barney was an investor in the New Bedford Railroad), which may have been what tempted Swain to leave the island and Barney to follow him.

There, at the Swains’ elegant home overlooking the Hudson, all four enjoyed the intellectual company of many Vassar professors, including their island compatriot Maria Mitchell, the college’s first female professor of astronomy. In 1869, Nathaniel Barney died. Eliza returned to Nantucket for good when she accompanied his body home for burial.

Her son Joseph, who was by now living at 96 Main Street, had a bustling household of his own, so he ensconced his grieving mother with Mary Swain Wright’s family at 94 Main but immediately went to work to build her a home of her own. Known even to this day as the Eliza Barney house, 73 Main Street is a monument to Second Empire architecture, with a dominating cupola, parapet along the ridge line, and as much gingerbread and bric-a-brac as the Victorian age invited. She moved in upon its completion in 1871.

One interior detail of this house was the little library to the left of the front hall. It was here Eliza did her genealogical work. It is possible, then, that the genealogy was a project she undertook as a widow, when the detail and time-consuming nature of the work would not have interfered with the busy and engaged life she had led when Nathaniel was alive.

So, Eliza either started keeping track of family histories before moving away and took it up again when she returned a widow, or she made it her end-of-life’s work, doing the bulk of it in the early to mid-1870s. No one seems to know for sure. Although her granddaughter, Eliza Barney Burgess, would carry on the project for awhile, there is no record of when she became involved. Did the two women work side by side as Eliza grew older? Or did her granddaughter continue the work only after Eliza grew too weak to make the entries? As age caught up with her, her body, though not her mind, became increasingly enfeebled. Throughout her lifetime she had loved spending summer days at the Hadwen’s cottage in ‘Sconset. In the early 1880s it was where Eliza Barney convalesced. “One summer,” writes a relative in a letter kept among the NHA’s archival papers, “Mother Barney [as she was known to her family at this stage of her life] fell and broke her hip and spent most of the summer sitting on the porch. Everyone in the village loved her and the actors and actresses used to come over each day to entertain her . . . .”

Eliza Starbuck Barney died on March 18, 1889, just shy of her eighty-seventh birthday. In her long life she made genuine contributions to many areas of island life, some that changed the status quo in preparation for the future. But her greatest legacy was as a simple scribe-copying the past lives of Nantucket’s famous, infamous, and ordinary citizenry into the record books for all time.