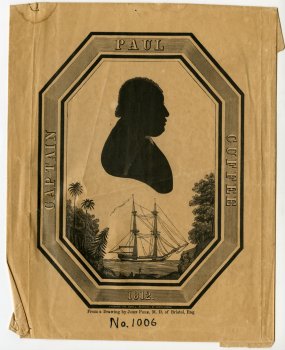 Whaling captain and merchant Paul Cuffe, sometimes spelled Cuffee, (1759–1817) was one of the most prominent and financially successful people of color in the early United States. He was born on Cuttyhunk Island. His mother was a Wampanoag woman and his father a formerly enslaved Ashanti man from West Africa (modern day Ghana). The couple came to own a 116-acre farm in Westport, Massachusetts, and had ten children. When Cuffe was about 14, his father died; two years later he signed aboard a whaling voyage to the Gulf of Mexico to help support the family. This was quickly followed by signing aboard two trading voyages to the West Indies, during the second of which he and his shipmates were taken prisoner by the Royal Navy. After a few months in a New York prison, he returned home for two years.

At around age 20, Paul, with his brother, John, successfully petitioned the Massachusetts legislature to grant all free people of color in the state the rights and privileges of citizenship, since such people were subject to taxation.

Later in the Revolution, Cuffe made numerous attempts to trade with Nantucket in a small boat, only one of which was successful. In 1784, he married. He undertook a cod fishing to the Geroge’s Bank, which succeeded in opening up a commercial fishery from Westport.

In partnership with his brother-in-law, Michael Wainer, Cuffe undertook increasingly successful commercial voyages that allowed him to buy a succession of trading vessels as well as farming property in Westport. In 1793 he commanded a whaling voyage to the Strait of Belle Isle, the profit from which he used to build a 69-ton schooner he named Ranger. In this vessel he made profitable trading voyages to the Chesapeake, Maine, and Delaware. Gradually he became owner of majority shares in numerous vessels, some of which he commanded, typically hiring all-Black crews.

Cuffe became a prominent member of the Society of Friends in Westport, where he built a meeting-house and a school and was actively engaged in charitable works. He used his commercial success to promote the advancement of Sierra Leone and encourage the resettlement of Black Americas to Africa. The War of 1812 disrupted his overseas commercial activities, but his social and business prominence allowed him to meet directly with President James Madison about a seized cargo. He continued his connections to Sierra Leone after the war, but died at the age of 58 in 1817 as probably the best known Black man in America.