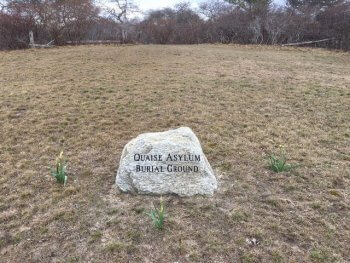 On February 21, 1844, fire broke out in one of the buildings at the Quaise Asylum for the Poor. Of the fifty-nine “inmates” of the asylum (several bedridden), ten—aged 33 to 80—lost their lives before firefighters could make their way to Quaise. Their remains were buried in a nearby field facing Polpis road. Ten years later, the Asylum was moved to town, and sixteen years after that, Polpis road was relocated to the north.

Not visible from the new road, the burial place might have been lost to memory if James Gibbs had not taken the trouble to mark its boundaries with cement posts at each corner. Nonetheless, the location had been all but forgotten by 1966 when Jay Gibbs, Nantucket’s aged bell-ringer, led interested people to where his father had set the corner posts back in the 1880s.  In 2010 the Town of Nantucket rededicated the cemetery and erected a sign there. Since then, an inscribed boulder has replaced the wooden sign, and plans are under discussion to install a monument listing the names and dates of those interred there.

The proposed monument will list the name of only one person who took heroic action during the fire. Thirty-three-year-old Lydia Bowen carried her child to safety and then re-entered the burning building and perished.  Other rescuers survived. Among them was thirty-nine-year-old Phebe Lovelace.

According to the March 14, 1844, issue of the Morning Telegraph, “Mrs. Phebe Loveliss” saved six fellow inmates “by her own strong arm,” and in recognition of her efforts she had been issued a check for fifty dollars from Massachusetts congressman Joseph Grinnell.  A portion of the award was to be used for the benefit of the survivors and another portion was specifically for Phebe Lovelace, whose actions had “given her an enduring name among her fellow citizens.”

In the course of three weeks, recognition of the extent of Phebe Lovelace’s accomplishment had expanded. Previously, on February 23, 1844, the same newspaper had reported that she had personally rescued two or three people “at the imminent risk of her own life.” Now it was six.

Who was Phebe Lovelace, and why was she an inmate at the Asylum on that bitter winter night?

She had been born in 1805, the fourth of six children of William Bennett and Phebe Swain. Her father had come to Nantucket from England, while her mother was a descendant of Richard Swain “the first of Nantucket” (1601–1682). Named for her mother, young Phebe married Charles Lovelace, of whom nothing more is known than that he was born in 1803. They had no children. By 1844 Phebe was on her own and a “pauper inmate” of the Quaise Asylum. Whatever had become of Charles Lovelace, she was free to remarry, which she did in April 1849. Her new husband was forty-one-year-old shoemaker William R. Folger. At the time of this second marriage, Phebe was an orphan, her mother having died in 1846 and her father in 1848 at the Asylum. Unsurprisingly, considering their ages, Phebe and William had no children. Nonetheless, one would hope that Phebe had at last found a comfortable life.

Unfortunately, this was not to be. On May 27, 1859—ten years after her marriage to William—Phebe was found “in an old building on Pleasant Street in a state of beastly intoxication.” Carried to her home, she died at noon that day. Once again, her heroic accomplishment back in February 1844 was magnified. According to the newspaper, Phebe had been “instrumental in saving the lives of seven of the inmates at the Asylum at Quaise.” So, as prophesied in 1844, her name had endured to the end, tragic though her own end was. William survived Phebe by three years, succumbing at age 52 to “palsy,” perhaps Parkinson’s Disease.