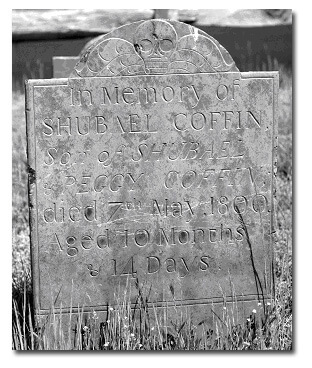 If you have recently driven by Newtown Cemetery on Sparks Avenue or the Old North on New Lane, and seen a small, red-haired woman stooping amid the stones, that was me. I’m photographing and cataloguing the tombstones of Nantucket.

The NHA Research Library is in the process of building a database on the tombstones of Nantucket. Epitaph inscriptions, condition information, design motifs, and specific location information are available on many cemeteries through this database, which is available to everyone. Photographs of the stones are being added (hence the stooping in the cemetery). The project is building on work on the Old North and Newtown Cemeteries recorded by the NHA in 1900 and work completed by Barbara White’s middle school students, and accomplished with the help of many volunteers. Hopefully all the cemeteries in Nantucket, except Prospect Hill, will be entered into this database by the end of the summer.

Many people who ask questions about cemeteries at the NHA Research Library are looking for their ancestors’ gravestones. If a death date is on the marker, it’s a good source of genealogical information. Sometimes people want to simply visit a relative’s resting place. In the cemetery project, we are hoping to answer such queries, as well as record the current condition of the markers. Some of the stones are in terrible shape– covered with lichens, broken, or damaged by weed-whackers. On some stones, the lettering has just weathered away, especially on stones made out of a certain kind of pink sandstone, called “brownstone.” The inscriptions recorded in 1900 have really helped with our current effort and we have been able to match up nearly illegible stones with the old records.

I’ve found some interesting epitaphs in Nantucket’s cemeteries. One of my favorites is:

Remember me as you pass by
As you are now so once was I.
As I am now so you must be.
Prepare for death and follow me.

There’s a chastising tone to this, as if to say, “don’t think you’re better than I, just because you’re alive.” Apparently it was also a favorite of early Nantucketers, because variants are located on several stones. There are also some wonderful carvings. Look in the Old North cemetery for slate tombstones featuring winged skulls, which symbolize the flight of the soul from mortal man. The faces grimace at you as you walk by-small specters watching the living. The cemetery behind the hospital has quite a few lovely tree-motif stones. The most popular design across all Nantucket cemeteries, however, is an urn with a willow tree or willow branches. The willow, according to tradition, symbolizes perpetual grief and mourning; the urn, immortality. Urns draped with garlands or featuring angels peeping inside are common in Victorian graveyards. In the older cemeteries, the stones are not in neat rows. The headstones and footstones frequently face in opposite directions. This higgledy-piggledy arrangement is exacerbated by many stones being missing.

Missing stones are not uncommon in cemeteries. Some may have fallen and been buried over time. It seems unlikely that a stone could lie long enough to get buried, but it happens. Take a walk through any old cemetery and you’ll see some in the process of being engulfed. Some of the markers may have decayed. The 1900 record describes some markers as wooden tablets, so it’s not unreasonable that the stones have not have survived for another hundred years. Missing stones may also have been stolen. You may ask yourself, who would steal a grave marker? People who like antiques, people who want souvenirs, and sometimes, well-meaning people who wish to “rescue” an obviously uncared for item from the cemetery. Although Massachusetts law (Chapter 272: Section 73A) directs that stones may be removed for repair or reproduction “by community sponsored, educationally oriented, and professionally directed repair teams,” somehow in many people’s minds this has translated to moving it to their living rooms for safe keeping.

The mission of the NHA is to preserve and interpret the history of Nantucket, and the stones of the cemeteries are lasting, but not permanent, records of that history. In an effort to serve the Nantucket community, we are attempting to preserve such records.

Originally published in the “Keeping History” column of the Inquirer & Mirror, 22 July 2004, by Georgen Charnes, photo by Jim Powers.