The most reliable genealogy for Nantucket’s families of the seventeenth, eighteenth, and nineteenth centuries, the Barney Record contains vital information on more than 40,000 Nantucketers.

About the Barney Genealogical Record 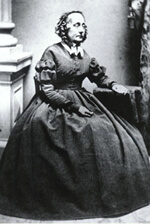 n the nineteenth century, Eliza Starbuck Barney (1802–1889) created a genealogical record that contained the births, deaths, and marriages of more than 40,000 Nantucketers over two and a half centuries. The original genealogical record comprises 1,702 ledger pages in six volumes. Her record was based on data compiled by Benjamin Franklin Folger, who passed his records on to her at his death, as well as information gleaned from newspapers, public records, and family and friends.

The Eliza S. Barney Genealogical Record generally contains data on white individuals who were born on Nantucket and some information on those who married Nantucketers. Reflecting prevailing prejudices of Barney’s day, it omits virtually all islanders of color, despite Barney and her husband being well-known anti-slavery activists. Information on families that left Nantucket is scanty, as Barney was not able to track those who emigrated from the island. Death dates for individuals still living when Barney herself died in 1889 are also generally missing, understandably, except for people added by Barney’s granddaughter, who continued the record into the 1910s.

Creation of the Database

The Eliza Starbuck Barney Genealogical Record Books, c. 1600-1900 (MS186) were entered into a searchable database in a project led by Betsy Tyler, and with data entry by Tanya Bresinsky, Patti Hanley, and Joan Elrick Clarke. (For more information on the project, see Historic Nantucket, Family Roots, Winter 1998, page 8.) The work was funded by several generous grants from the Tupancy-Harris Foundation and a small grant from the Massachusetts Society of the Cincinnati.