The many threads that make up the island’s extraordinary history meet in the association’s collections presenting the best the NHA has to offer in craft and folk arts. 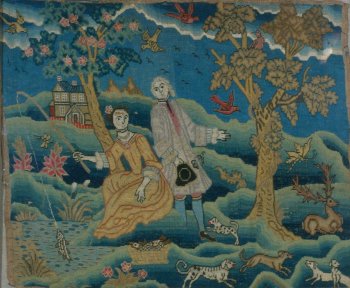 Needlework picture of a lady fishing, 1765

Stitched by young Susan Colesworthy (1752–1811) in 1765, this needlework picture is part of a group of similarly designed pastoral embroideries called “The Fishing Lady Pictures.” Pastoral canvaswork pictures were fashionable in England throughout the first quarter of the 1700s, becoming part of the curriculum at Boston boarding schools during the mid-eighteenth century. The Colesworthy family were neighbors of Paul Revere, and Susan’s father, Gilbert, took part in the Boston Tea Party. Around 1773, Susan and some of her family moved to Nantucket where Susan, who never married, gave birth to her daughter Persis that year. A treasured family heirloom, the Fishing Lady needlework picture passed down through generations until it was bequeathed to the NHA in 1937 by the association’s first curator, Susan E. Brock (1852–1937). 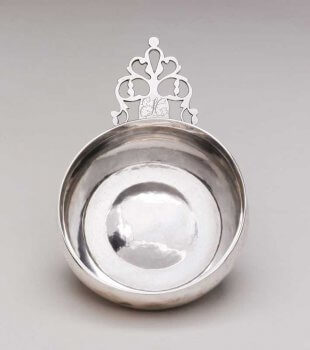 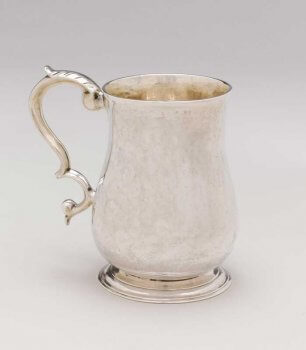 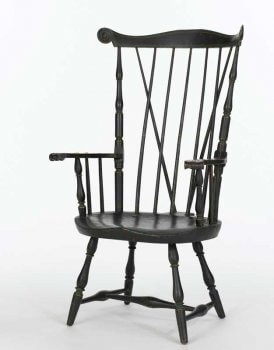 A great deal of nineteenth-century whalemen’s scrimshaw is sentimental and domestic in nature, like this measuring stick, reflecting the longing for home that years at sea could inspire. Whalers frequently engraved homey scenes onto sperm-whale teeth, fashioned intimate corset busks, carved fancy pie crimpers, and made quasi-practical items such ivory-ended rolling pins and bone food choppers as remembrances for family and friends. We do not know exactly who the Sarah Coffin named on the stick was—there were more than two dozen women of that name living on Nantucket in 1819—but we can be reasonably certain some whaleman loved her to have made her a gift such as this. 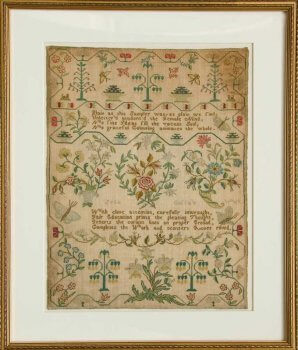 As a needlewoman, Lydia Coffin was clearly talented and well trained. Her exceptional craftsmanship is brilliantly displayed in this fancy sampler, with its balanced composition, sophisticated coloring, and finely executed stitching. Unfortunately, so many Lydia Coffins lived on Nantucket at the turn of the nineteenth century that we have no idea who exactly she was, and the sampler provides no information to narrow the field. The sampler’s moralizing text, “carefully inwrought” of the smallest stitches, declares the necessity of education to fill young women’s minds. Nearly a dozen samplers dating between 1795 and 1835 are known that incorporate these same verses. The rhyme, including a third verse not employed here, originated in the May 1784 edition of The Boston Magazine as one of three poems written by a gentleman in Nova Scotia for his daughters’ samplers. 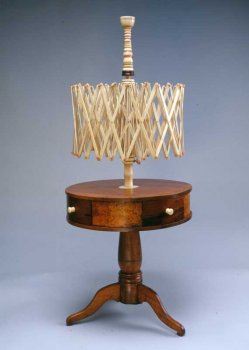 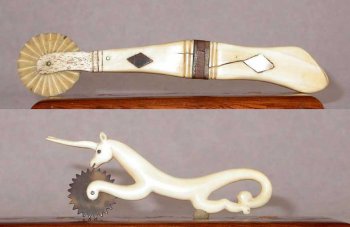 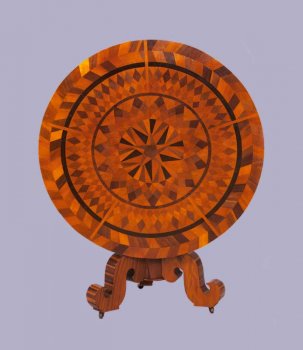 Carpenter Shadrach Gifford (1803–72) made this elaborately inlaid center table in 1852. Inside one drawer he scrawled the number 1384 as a reminder of the number of pieces of veneer he used. While he built the table of pine, he cut the veneer from mahogany, satinwood, walnut, birch, curly maple, rosewood, and other woods. The table’s peachwood components were taken from a tree in the yard of the Union Street house that he rented during the period when he made the table. Gifford appears to have sailed on a number of whaling voyages, leading eventually to his advancement to first mate of the New Bedford ship Hercules from 1845 to 1849. In the 1850s he worked as a shipwright, probably at the marine railway on Brant Point, were many island-owned whalers, coasters, and fishing schooners were repaired. A fire destroyed the marine railway in 1859, and Gifford and his family left the island sometime in the early 1860s. 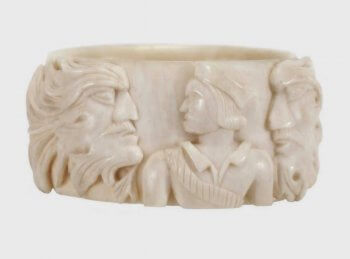 These spectacular decorative napkin rings are the work of an anonymous sailor aboard the 1854–58 voyage of the whaleship Oliver Crocker of New Bedford. They are carved with great creativity and skill, displaying a profusion of flowers and vines. Each has a central scene: a house in the woods, a fountain, an eagle, a hunter and two mythical green men. Originally there were twenty-four rings, and they formed a set with eleven coordinating knives and spoons of various kinds, all carved from sperm-whale ivory. 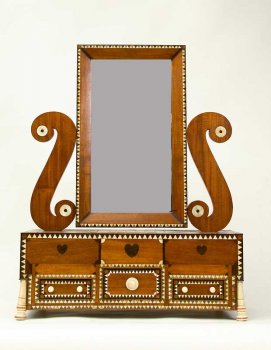 Captain James Archer made this spectacular dressing case for his third wife, Mary, during a whaling voyage aboard the bark Afton of New Bedford between 1853 and 1856. The voyage yielded only 336 barrels of sperm oil and 67 barrels of whale oil, suggesting the reason Archer had so much free time to make this gift. 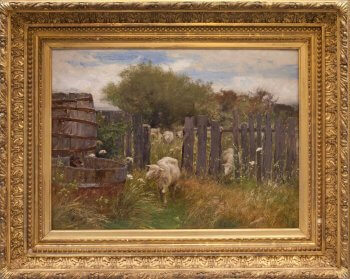 George Inness (1825–94)
Oil on board; 18 1/2 x 24 1/2 in.
Gift of the Friends of the Nantucket Historical Association with additional support from the Max and Heidi Berry Acquisition Fund and the NHA Acquisition Fund
2011.6.1

Landscape painter George Inness visited Nantucket a number of times. During 1883, he stayed with the well-known writer and music educator George Ward Nichols of Cincinnati and his wife Maria at their summer place in ’Sconset. This painting, one of a few Inness created that summer, presents Nantucket as a land of rustic decline, where sheep loll at their ease in the overgrown brush. The island’s picturesque quaintness was a chief selling point in Nantucketers’ efforts to recast the island as a summer destination after the Civil War. 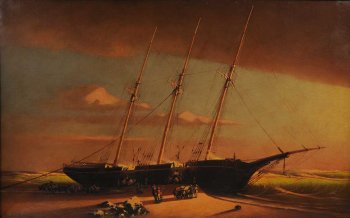 The coastal schooner Warren Sawyer wrecked on Nantucket’s south shore on the night of December 22, 1884. Captain Edwin L. Saunders and his seven men were rescued within an hour by the crew of the Surfside Lifesaving Station, despite the schooner rolling violently in the surf. Over the next two weeks, before the wreck broke up, islanders worked to discharge the vessel’s cargo and salvage its equipment and spars, while the curious turned out to take in the dramatic scene. Artist Wendell Macy, always looking for subject matter that would sell, painted at least seven versions of this scene. He exhibited this one at Congdon’s Pharmacy on Main Street and later shipped it to New Bedford for exhibition. The Inquirer and Mirror praised it as one of the artist’s “finest efforts in marine work, in which he has been so successful heretofore.” 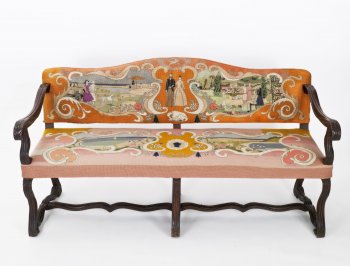 Sisters Hanna and Gertrude Monaghan from Philadelphia began summering on Nantucket in 1923, attracted by the island’s small art colony. In 1929, they purchased an eighteenth-century livestock barn off Main Street that they converted into a summer home and studio named Greater Light, after the sun. (Their other cottages, next door and across the lane, became Lesser Light and North Star, for the moon and the stars.) They filled Greater Light with eclectic furniture, art, and textiles, including this seventeenth-century Italian settee, which they recovered with elaborate canvas-work panels depicting the Monaghan family’s favorite island spots. Gertrude designed the panels for her mother, Anna, to embroider. After Anna died, Hanna finished the work, and the settee became a centerpiece in their home. The seat shows scenes of the moors, the sandy shore, and the waters where the family sailed. The back represents the family at Pocomo Head and in the garden at Greater Light. In the center, parents Anna and James Monaghan appear in their wedding apparel, with a cupid overhead and the sisters’ beloved greyhound napping beneath. Hanna later wrote that the weave of the needlepoint canvas made the stitched stripes on her father’s trousers too wide. “I would never have married a man,” she quoted her mother saying, “with such wide striped trousers.” 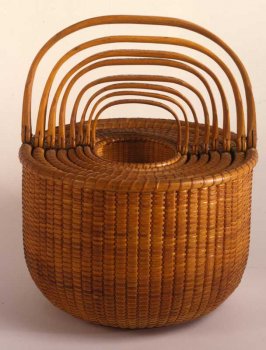 Davis Hall was a Nantucket carpenter, cabinetmaker, and sailor. He worked for many years aboard the South Shoals lightship, off Nantucket, where he was among the most accomplished of the many crewmen who passed the time making distinctive, tightly woven, wood-bottomed work baskets such as this elaborate set. 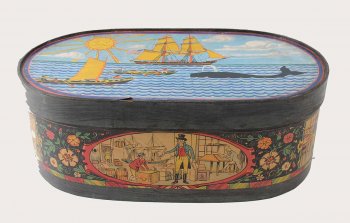 This bandbox is characteristic of the work of commercial artist Tony Sarg, perfectly capturing his constant drive to turn humor, fun, and nostalgia into gold.