The island’s diverse people, from Native Wampanoag sailors and English settlers to African American businessmen and colorful sea captains, find pride of place in a selection of portraits by such artists as Gilbert Stuart, Eastman Johnson, Elizabeth R. Coffin, Spoilum, and James Hathaway. 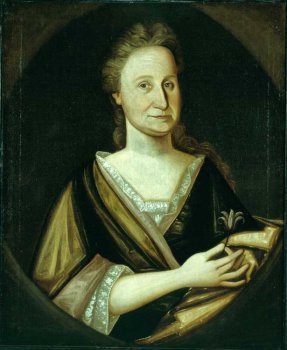 Mary Gardner (1670–1767) and her husband Jethro Coffin (1663–1726) were part of the second generation of English settlers on Nantucket. This portrait of Mary is the earliest known painted portrait of a Nantucketer, but it was not painted on Nantucket. The island during this period was isolated and rural with an economy too small to nourish its own fine arts traditions. Even as the island’s trade expanded internationally from mid-century on, the increasing cultural dominance of Quakerism and its doctrine of simplicity limited the development of a taste for the arts in all their forms, and those citizens of means who sought finer things had to seek them in mainland cities or in Europe. 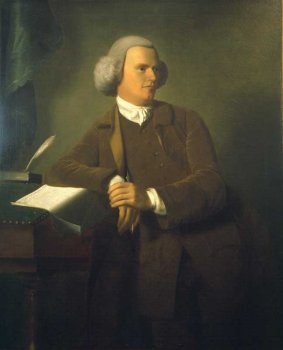 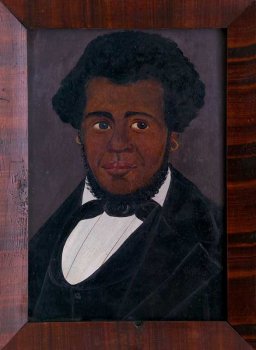 Captain Absalom F. Boston (1785–1855) was a leading figure in Nantucket’s African American community in the first half of the nineteenth century. He was a third-generation islander, and he and his family figured in a number of important milestones of local racial equality. Boston commanded the island’s first all-black whaling crew when he took the ship Industry out to the Cape Verde Islands in 1822. This voyage, although not a financial success, built on his experience on many previous whaling voyages, including those of the Lydia (1808–09), Thomas (1809–11), and Independence (1817–19). He found greater success on land, where he engaged in real-estate trading and innkeeping. 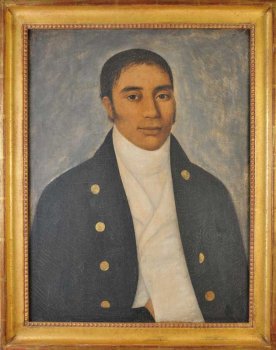 For a brief period after the American Revolution and lasting until the War of 1812, Nantucket ship owners engaged in the China Trade, often gathering seal pelts on the voyage out to trade for porcelain, tea, silks, and other goods at Canton (now Guangzhou). Sampson Dyer (1773–1843), a man of mixed African and Wampanoag heritage is believed to have signed aboard the Nantucket ship Active as steward for a trading voyage to China in the 1790s. From 1802 to 1805, he was aboard the Lady Adams of Nantucket on a voyage that hunted seals in the Juan Fernandez Islands off Chile before continuing to Canton. It is on one of these voyages that Dyer commissioned his portrait from the Chinese artist Spoilum, an artist who specialized in European-style paintings in oil of sea captains and both Chinese and Western merchants. 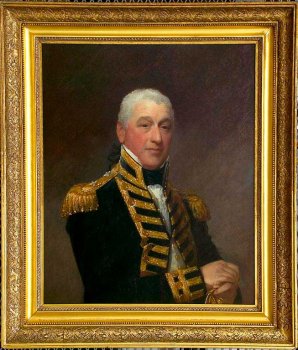 Admiral Sir Isaac Coffin (1759–1839) was a proud descendant of one of the first English families on Nantucket. Born in Boston to a family that remain loyal at the time of the Revolution, he joined the Royal Navy in 1773. A distinguished career allowed him to advance through the ranks and amass a considerable personal fortune. Looking to create legacies with his money, he visited Nantucket in September 1826. At the suggestion of Samuel H. Jenks, local publisher and school advocate, Coffin purchased a building and left an endowment to found a Lancastrian-style school, open free to all children descended from Tristram Coffin—a qualification that applied to a majority of the young people on the island at the time. 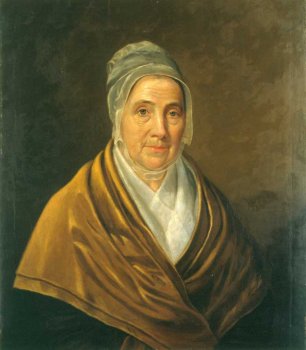 Attributed to William Swain (1803–47)
Oil on canvas; 27 x 23 in.
Gift of the Friends of the Nantucket Historical Association with contributions from the Macy family
1994.11.2

Abigail Pinkham Macy (1764–1842) hailed from Nantucket Quakers who settled in Hudson, New York. Her family’s faith is reflected in her plain mode of dress, although the prosperity she and her husband achieved is reflected in the commissioning of this fine portrait from the island’s leading painter. Abigail came to the island for a visit in 1785, where she met and married trader Obed Macy in 1786. Obed’s own memoir of Abigail’s life and character declared that “after tarrying here for some months she contracted a matrimonial acquaintance with the author of this memoir.”  The couple lived together “in the utmost harmony and true love 56 years,” enduring the loss of four of the ten children born to them “with Christian fortitude of mind, justly believing that all things worked together for good to them that love God.” In the midst of this stoical patience, it is pleasing to learn that Abigail also “was naturally of a cheerful disposition, pleasant in her conversation to all,” and of a “benevolent disposition.” 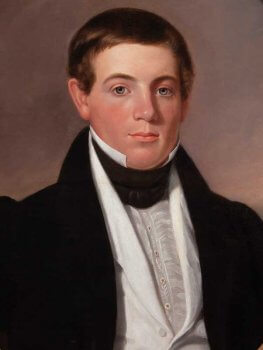 Nantucket whaling captain George Washington Gardner Jr. (1809–96) was the son and namesake of the island captain who first opened the important Offshore Ground, in the remote equatorial Pacific, to whaling in 1818. Young George made two voyages as a boy and teenager in his father’s ships before taking command of the Mariner of Nantucket in 1836 at age 27. He subsequently commanded the Nantucket and the Narragansett before retiring from the sea and becoming a railroad agent in New York state. The NHA holds logbooks from all three of Gardner’s commands, as well as logs related to his father’s ships. 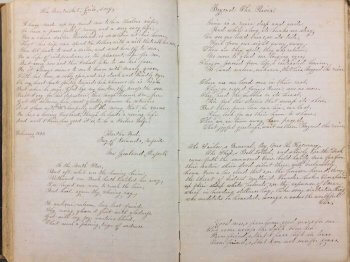 Eliza Spencer Brock sailed with her husband, Captain Peter C. Brock, and their five-year-old son Joseph on a whaling voyage to the Pacific in the ship Lexington in 1853. (Seven-year-old William remained at home.) Eliza hated the voyage, but channeled her feelings into describing the journey and collecting and writing poetry, which she preserved in this lengthy journal.  The book records the now-famous “Nantucket Girl’s Song,” which Eliza received from Martha Ford at Russell, Bay of Islands, New Zealand, in 1855: “I have made up my mind now to be a Sailor’s wife, / To have a purse full of money and a very easy life, / For a clever sailor husband is so seldom at his home, / That his wife can spend the dollars with a will that’s all her own . . . .” The lighthearted verses contrast poignantly with Eliza’s otherwise general mood of unhappiness at sea. 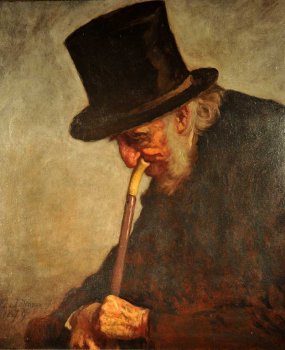 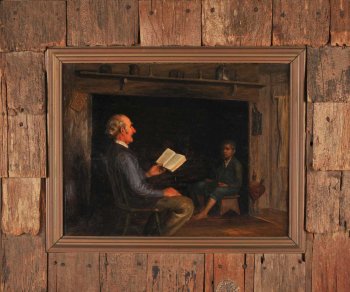 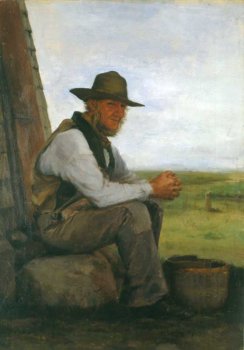 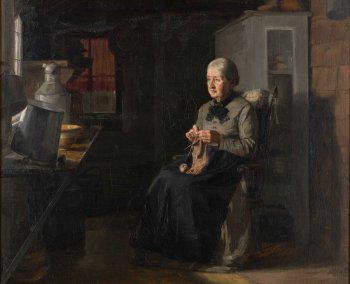 The Window Toward the Sea (Phebe Folger Pitman), 1886

Elizabeth Rebecca Coffin  is the most important female artist associated with Nantucket. Many of her works depict Nantucket scenes, often approaching the island and its people from a nostalgic point of view. In this portrayal of octogenarian Phebe Folger Pitman (1801–93) knitting by the window of her ’Sconset kitchen, the rustic details of the furniture and household goods combine with the contemplative aspect of the sitter to conjure up an image of quiet life in a rural village—the very image of quaint Nantucket that was a major selling point of the island as a summer destination in the last quarter of the nineteenth century. Coffin exhibited this painting at the National Academy of Design in 1887. 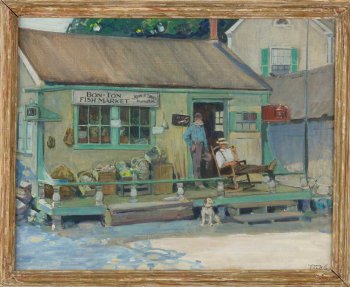