The island of Nantucket, 25 miles off the coast of Cape Cod, is well known for its whaling heritage and New England seaport atmosphere, and for more than 150 years it has been famous as a summer holiday destination as well. 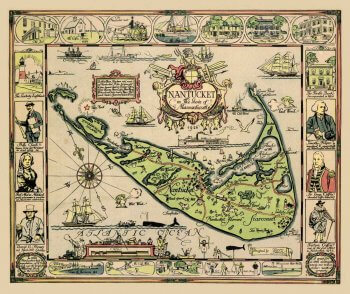 Nantucket in the State of Massachusetts, 1926

Tony Sarg, the New York puppeteer and graphic artist, spent summers on Nantucket, where he and his wife ran a series of novelty shops in the 1920s and 1930s. This map illuminates the island’s modern sights and delights while also celebrating numerous aspects of its history. 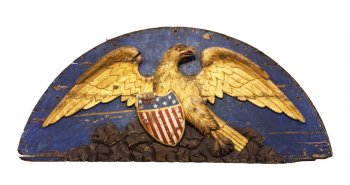 Eagle lunette from an unknown steamship 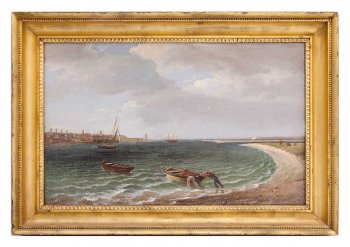 The island’s reliance on the water forms the theme of View of the Town of Nantucket, the earliest known painting of the town. English-born painter Thomas Birch (1779–1851) lived most of his life in Philadelphia. This is one of his earliest surviving canvases. He is not known to have visited Nantucket, so scholars generally think he based this painting on a sketch by fellow Philadelphian Joseph Sansom (1767–1826), which is known through an engraving by Benjamin Tanner published in 1811. 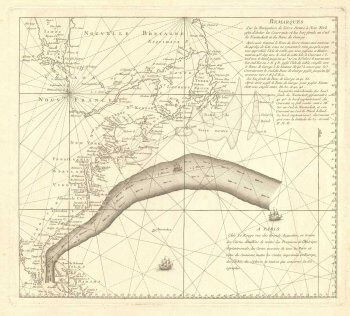 Benjamin Franklin was a grandson of Peter Folger, one of the original English settlers of Nantucket. When he was Deputy Postmaster General for the British Colonies in American in the 1760s, he was asked why English mail packets took two weeks longer to sail from the Britain to the Colonies than they took to go the other way. Franklin consulted his cousin, Timothy Folger, a Nantucket merchant captain and whaler, who provided Franklin with an explanation and description of the Gulf Stream. Franklin forwarded Folger’s observations to the Postmaster General. This is the second printing of Folger and Franklin’s Gulf Stream chart, printed in Paris in the 1780s.