This exhibit highlights spectacular examples of sailors’ scrimshaw, journals from captain’s wives, and art inspired by the whale hunt and sea journeys to the far side of the world. The association is also pleased, during the 200th birthday year of Herman Melville, to be displaying the only surviving relics from the 1820 tragedy of the whaleship Essex, whose destruction by an angry whale inspired key aspects of Moby-Dick. 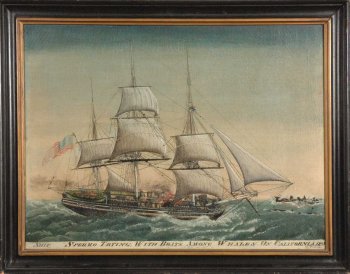 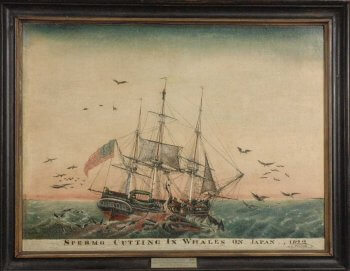 The Spermo made just one whaling voyage, sailing to the Pacific under Captain James Bunker between August 1820 and March 1823 and returning home with a profitable 1,920 barrels of sperm oil. Nothing is known about the painter J. Fisher. He was clearly an experienced deep-water sailor and a whaler, for all the details of rig and action in these paintings are precisely correct. Atmospheric, dramatic, and informed, they are masterpieces of marine art. 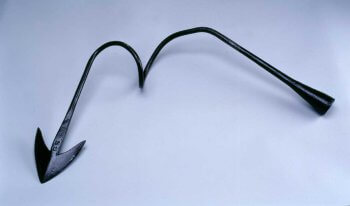 The wrought-iron shanks of the harpoons whalemen used to catch whales were made to be malleable, in order to catch better in a whale’s flesh and to prevent them from snapping as the animal moved to escape. After a successful hunt, bent irons were recovered and straightened by the ship’s blacksmith for reuse, although occasionally a twisted iron was retained as a souvenir. This iron is a typical double-flued example, commonly employed on American whaleships before 1850. It is not certain whether the loop bent into its middle is the result of use at sea or a demonstration of the iron’s malleability carried out on land. Either way, the initials “G S” stamped on the head indicate it was made by blacksmith George Swain Jr., who maintained a smithy on island for more than fifty years. 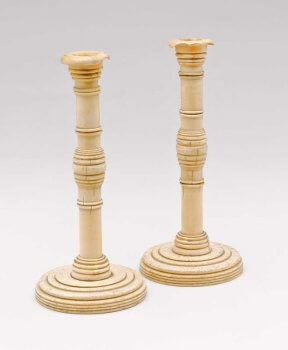 Unknown maker
Whale bone, whale ivory; 9 1/2 x 4 x 4 in. each
Gift of the Friends of the Nantucket Historical Association with support of the Gosnell and Geschke families
2008.10.1 & .2

Spermaceti candles made up about twenty percent of the total value of whale products manufactured on Nantucket in the 1830s. Bright, clean-burning, and long-lasting, they sold for a premium and could be found illuminating the best homes in the country. The island’s leading product, ahead of candles, was refined sperm oil, much of which was also burned for illumination.  These candlesticks, made from sperm-whale ivory and bone, are perfect symbols of Nantucket at the height of its whaling prosperity The very animal whose teeth and jawbone were shaped on a lathe to create this elegant pair of stands was killed so that its bodily fats could be turned into illuminants to light America’s way and lubricants to speed the machinery of the Industrial Revolution. Although the thought of burning candles made from sperm whale in holders made from sperm whale may offend modern sensibilities, which value whales for their majesty and beauty rather than for their industrial utility, in the nineteenth century such an act was merely a natural expression of man’s dominion over nature. 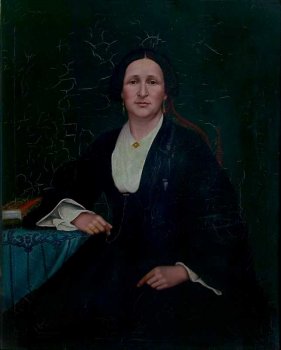 Susan Veeder and her young sons accompanied her husband, Captain Charles A. Veeder, on a whaling voyage to the Pacific Ocean aboard the ship Nauticon between fall 1848 and spring 1853. The voyage was an eventful one, which Susan described and illustrated in lively detail in her private journal. Four months out, a daughter, Mary Frances, was born, at Talcahuano, Chile. All was well until early 1850, when the child was accidentally poisoned by medicine while the ship lay at Tahiti. “Could we think of burying her at Tahita,” Susan wrote. “No, we could not. We must take her with us away. So we have had a lead coffin made and the corpse embalmed to take home with us.” 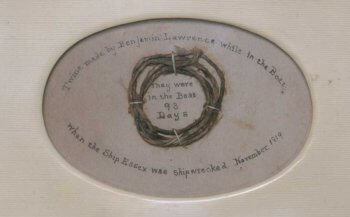 This small length of twine made by twenty-one-year-old boatsteerer Benjamin Lawrence (1799–1879), is the sole surviving artifact from the wreck of the Nantucket whaleship Essex. On November 20, 1820, an enraged sperm whale rammed the Essex while the ship hunted whales near the equator in the remote Pacific. The ship promptly filled with water and rolled over, a total wreck. The twenty men in the crew tried to sail to South America, 3,000 miles away. Three months later, passing ships picked up just five emaciated survivors in two boats, while three other men were stranded on a remote island. Twelve men were dead—seven of them eaten in desperation by their starving shipmates. 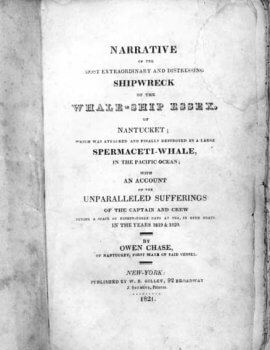 Narrative of the Most Extraordinary and Distressing Shipwreck of the Whale-Ship Essex, 1821 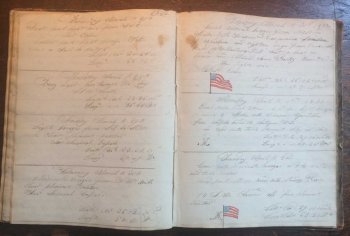 This decorative engraving is both the finest example of pictorial scrimshaw in the collection and one of the largest and finest scrimshawed panbone scenes known from the nineteenth century. Made from the rear section, or pan, of a sperm-whale mandible, it was carefully and knowledgeably engraved by an unknown artist to depict a range of whaling activities on the high seas. 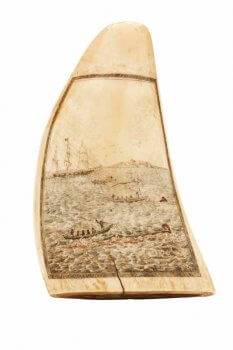 William Lewis Roderick was a ship’s surgeon on three South Seas whaling voyages in the bark Adventure of London between 1847 and 1856. His engraved teeth and panbone plaques are widely considered to be among the best pictorial scrimshaw. 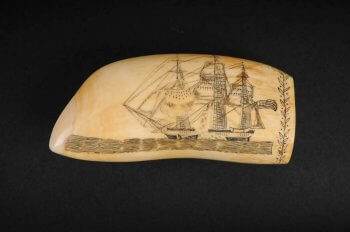 Edward Burdett is the earliest known American engraver of sperm-whale teeth. Born on Nantucket, Burdett went whaling at the age of seventeen on the Nantucket ship Foster (1822–24). He rose through the ranks on successive voyages, including the period of 1825–29, during which he worked aboard vessels that might have included the Barclay (1825–26), Pacific (1826–29), and Rose (1826–28). His last voyage, aboard the Nantucket ship Montano (1833–36) proved fatal when Burdett became fouled in a harpoon line during a hunt and was dragged overboard to his death. 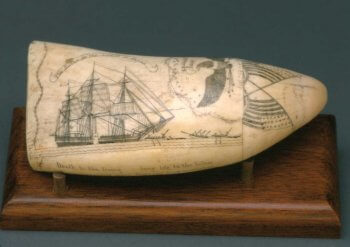 This scrimshawed sperm-whale tooth is part of a series engraved by Frederick Myrick aboard the ship Susan of Nantucket between 1826 and 1829. Myrick is the earliest shrimshander known to both sign and date his work; as a result, his pieces have become highly prized by collectors and museums alike. Myrick’s life and work were first brought to public attention by islander Everett U. Crosby in his 1955 book Susan’s Teeth and Much About Scrimshaw. At that time, only eight teeth were known. Today, thirty-seven have come to light, all similar but no two exactly alike.