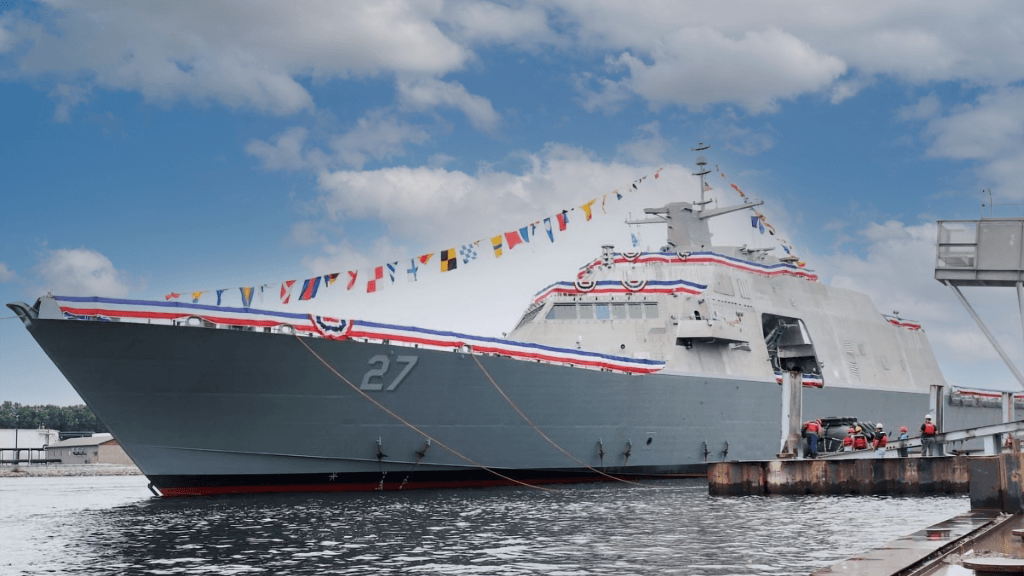 “The USS Nantucket is the third U.S. Navy ship commissioned to honor the maritime history and spirit of Nantucket,” said Acting Secretary of the Navy Thomas Harker. “I have no doubt the Sailors of USS Nantucket will carry on the proud legacy from generations past in preserving sea lanes, countering instability, and maintaining our maritime superiority.”

The last Navy ship to be named the USS Nantucket was commissioned in 1862 to serve the Union side during the Civil War.

Assigned to the South Atlantic Blockading Squadron, Nantucket participated in the attack on Confederate forts in Charleston Harbor 7 April 1863. Struck 51 times during the valiant but unsuccessful assault on the vital Southern port, the single-turreted monitor was repaired at Port Royal but returned to Charleston to support Army operations on Morris Island, engaging Fort Wagner 16, 17, 18, and 24 July. She captured British steamer Jupiter at sea 15 September. She again challenged the Charleston Harbor forts 14 May 1864 and thereafter remained on blockade duty through the end of the American Civil W

USS Ranger, later USS Rockport and USS Nantucket (PG-23/IX-18), was a gunboat of the United States Navy. A screw steamer with full-rig auxiliary sail, Ranger was destined for a very long 65-year career, serving first as a U.S. Navy gunboat from 1876 to 1920, and later as a training ship with the Massachusetts Maritime Academy from 1909 to 1941.ar.

Sometimes included when referring to prior U.S Navy ships named Nantucket is the Lightship Nantucket (LV-112).  Although not commissioned as a Navy vessel, during World War II (1942-1945), LV-112 was withdrawn from lightship duty, painted battleship gray, designated as the USS Nantucket and served as an examination Patrol Vessel off Portland, Maine.  While serving, LV-112 saved crewmembers of the USS Eagle-56, which was torpedoed and sunk off Portland by a German U-Boat, U-853.

Unveiling of the Official Crest

On September 20, 2021, the Nantucket Historical Association hosted the unveiling of the official crest of USS Nantucket (LCS 27) at the Whaling Museum.

It is anticipated that USS Nantucket will visit her namesake island throughout her career, where her officers and crew will work alongside and interact with residents, local government and other island organizations. 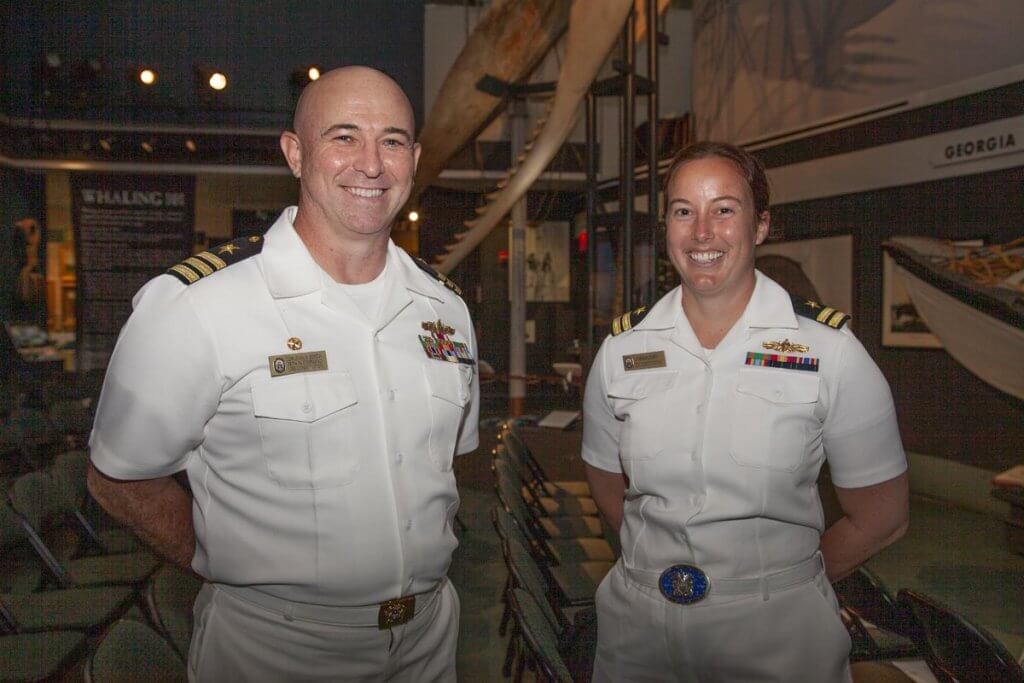 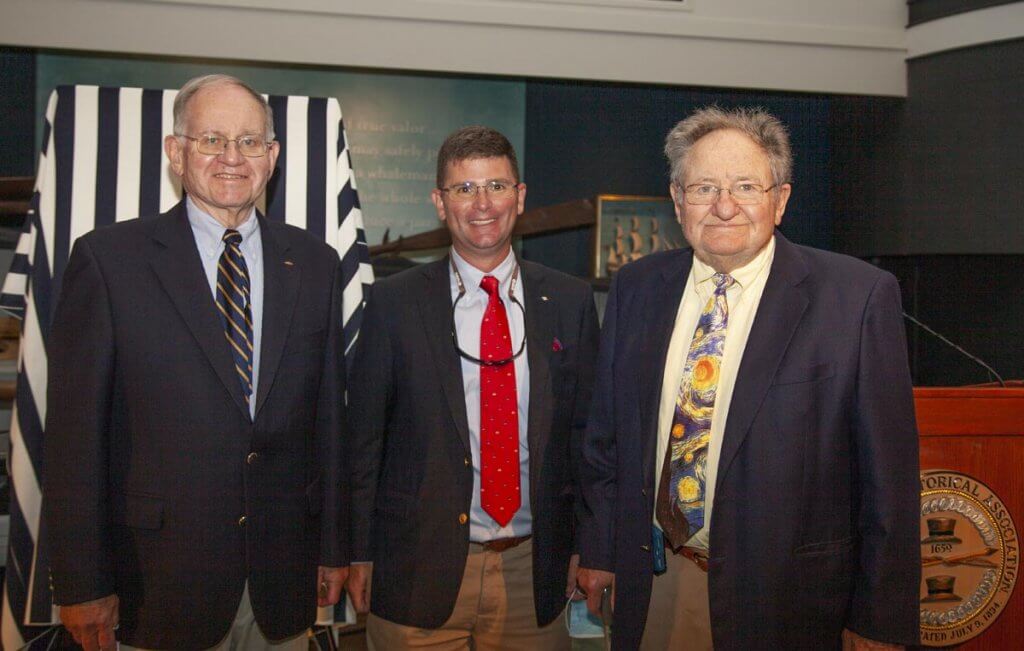 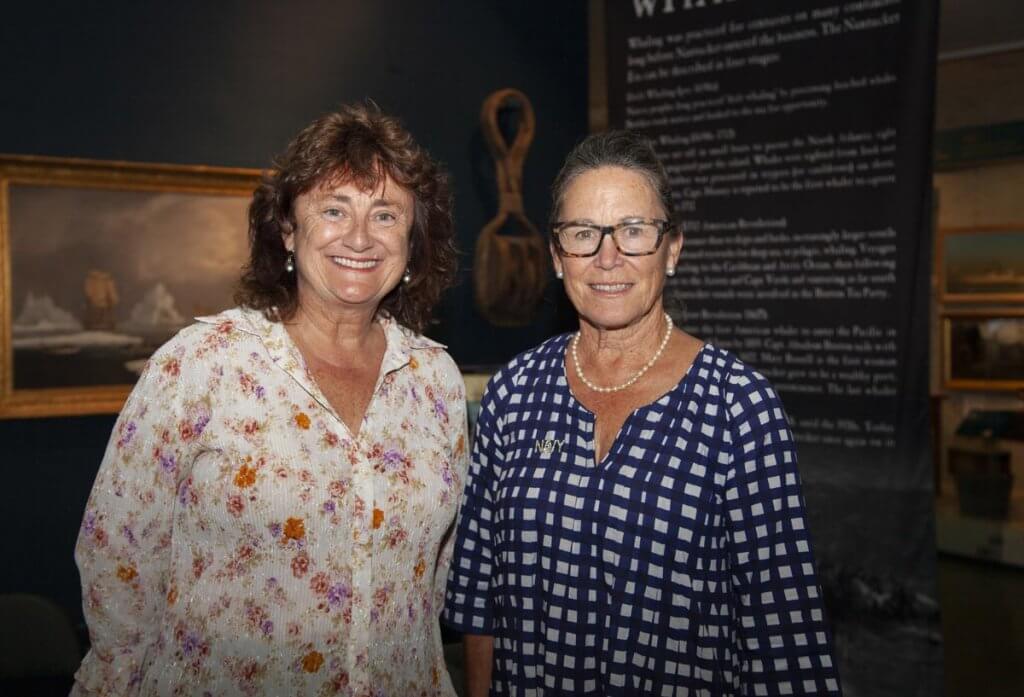 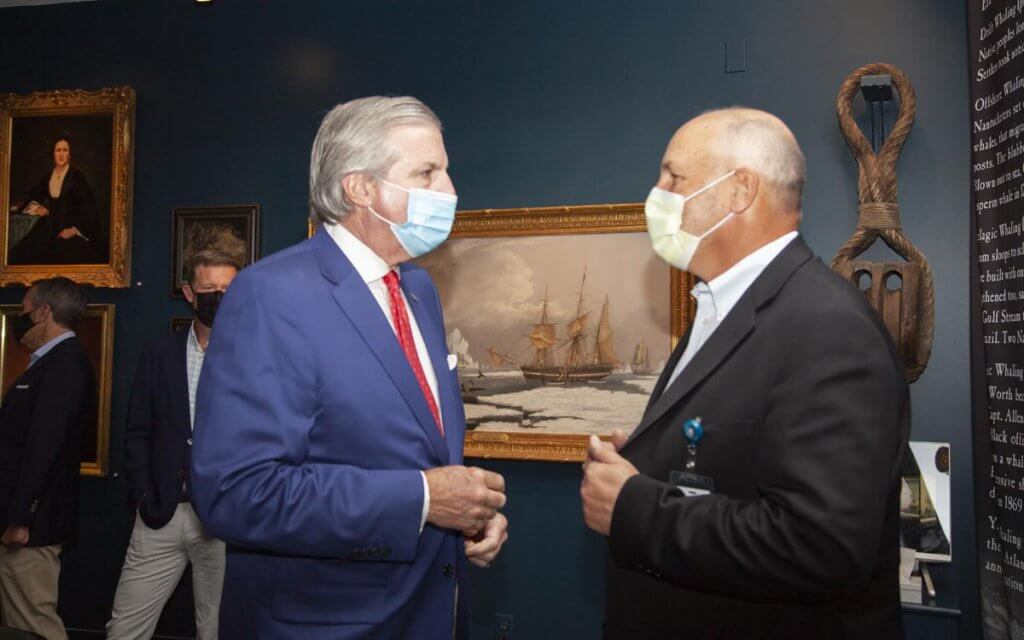 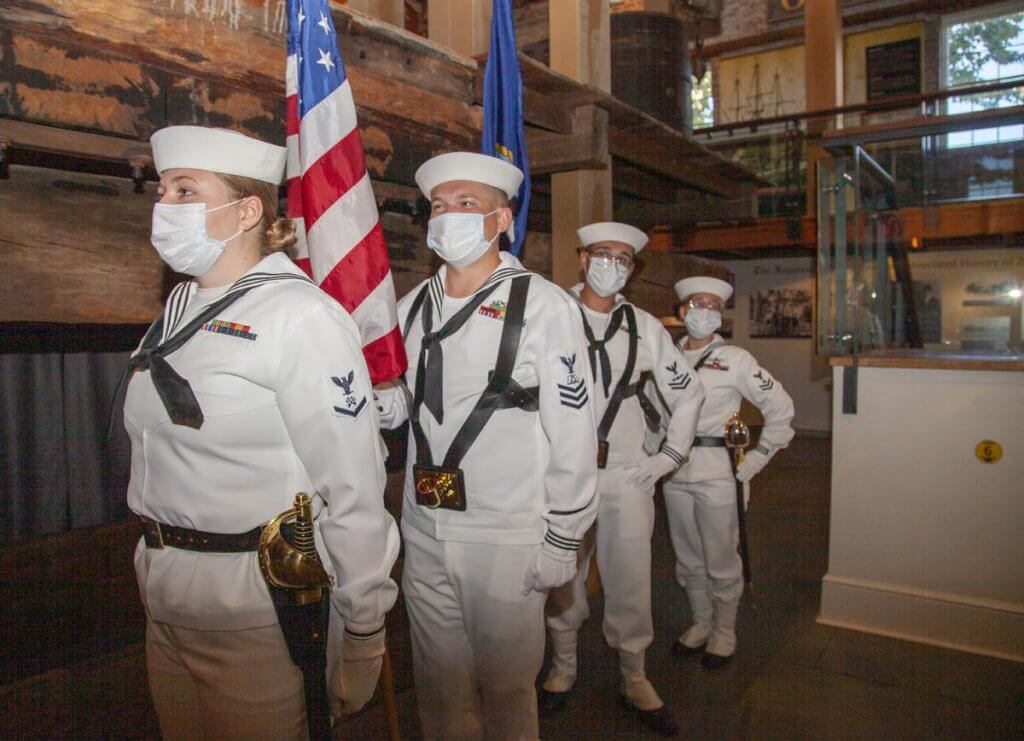 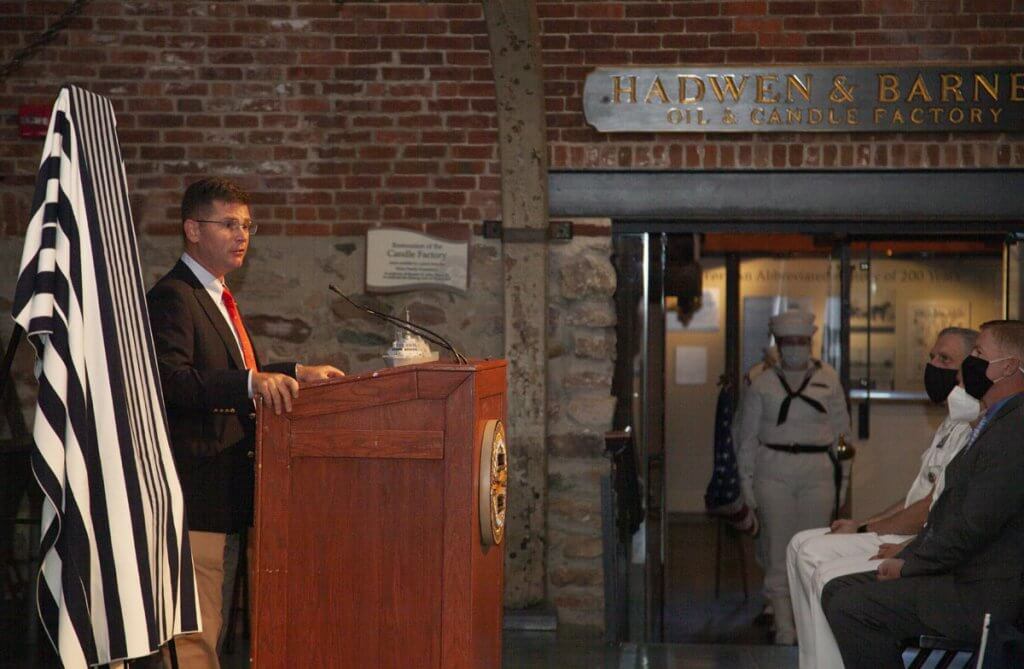 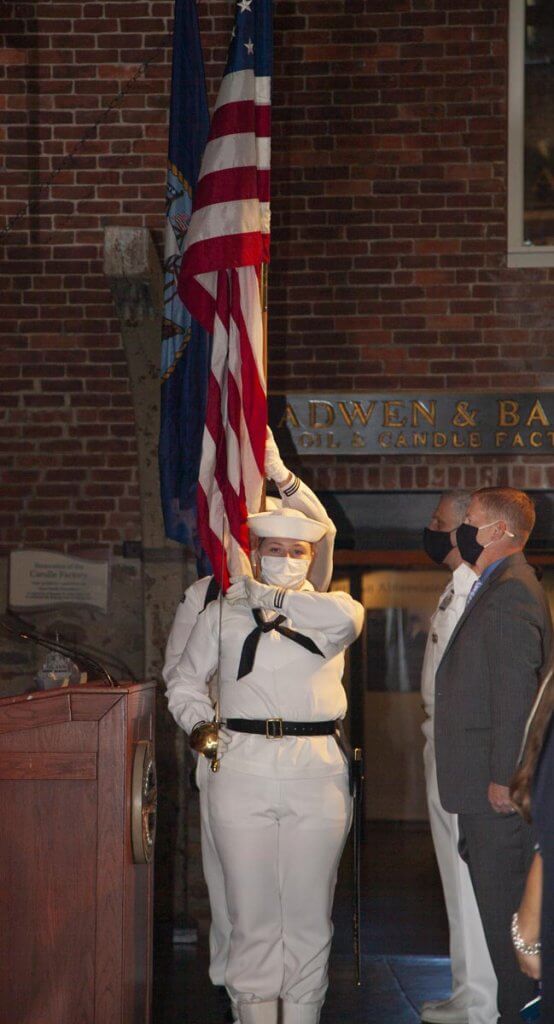 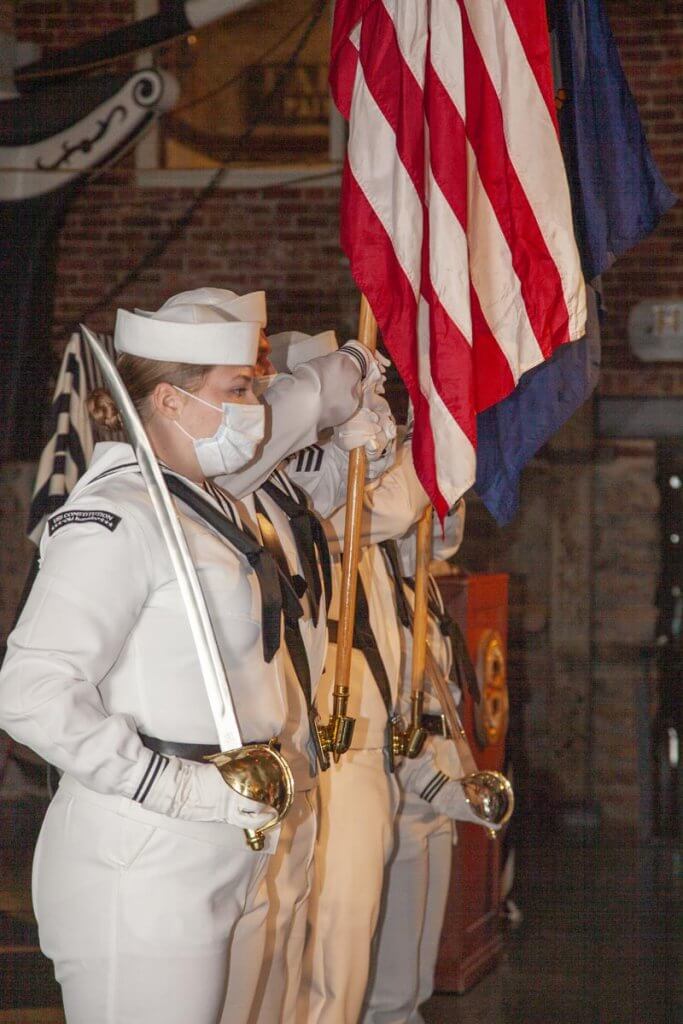 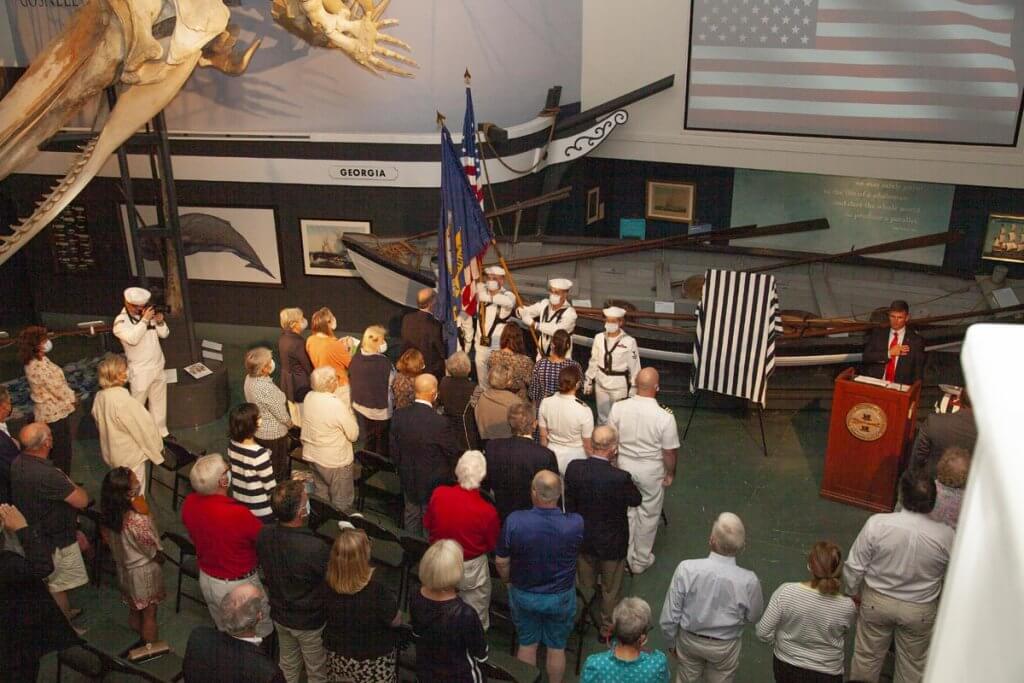 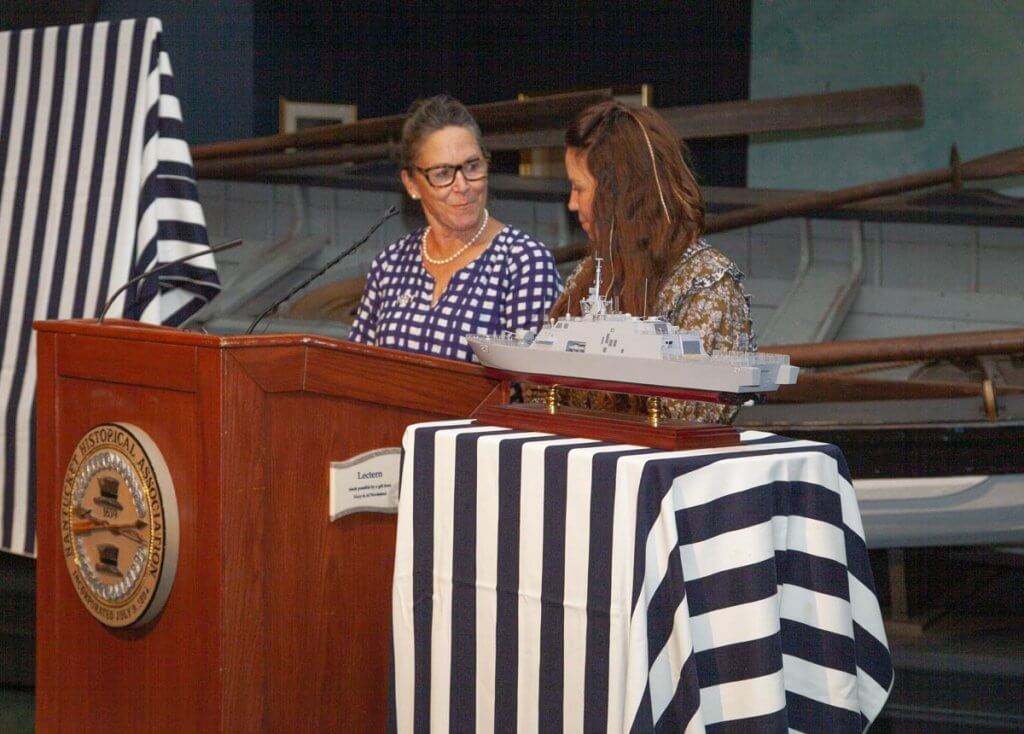 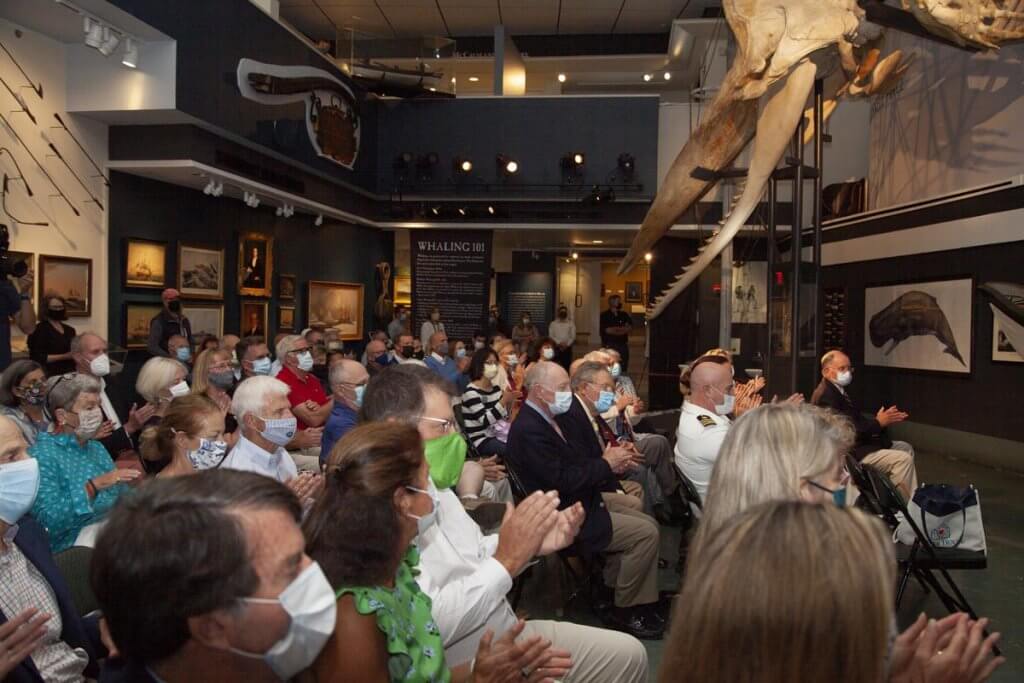 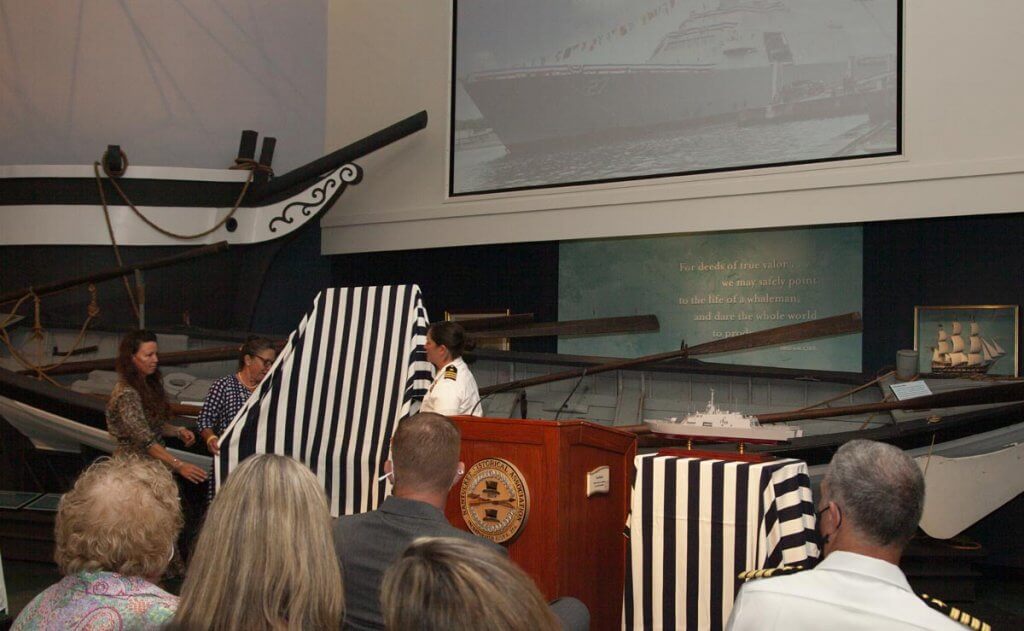 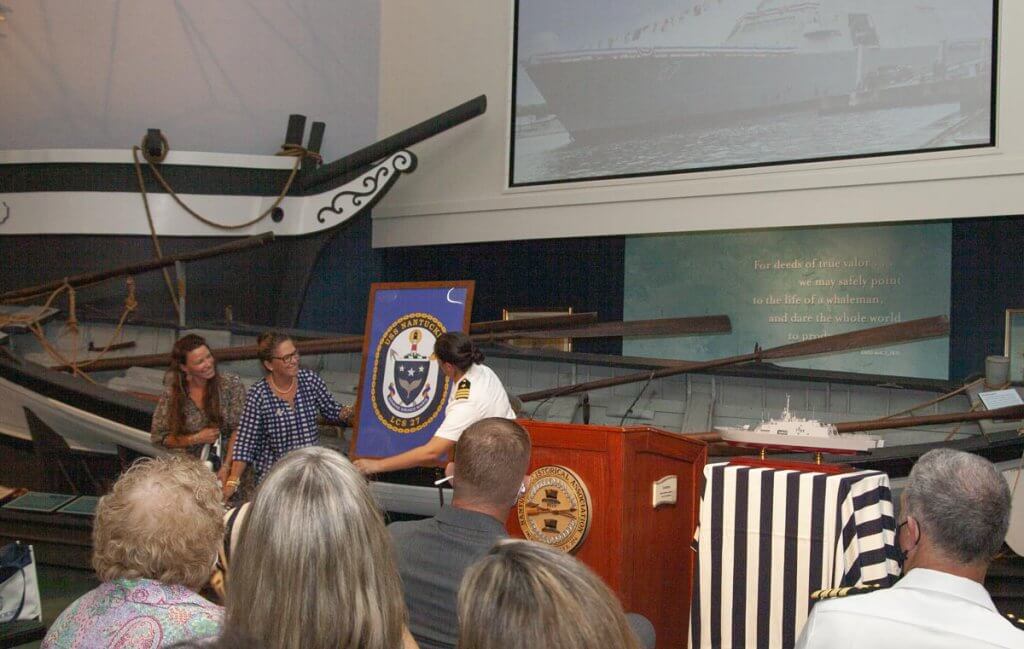 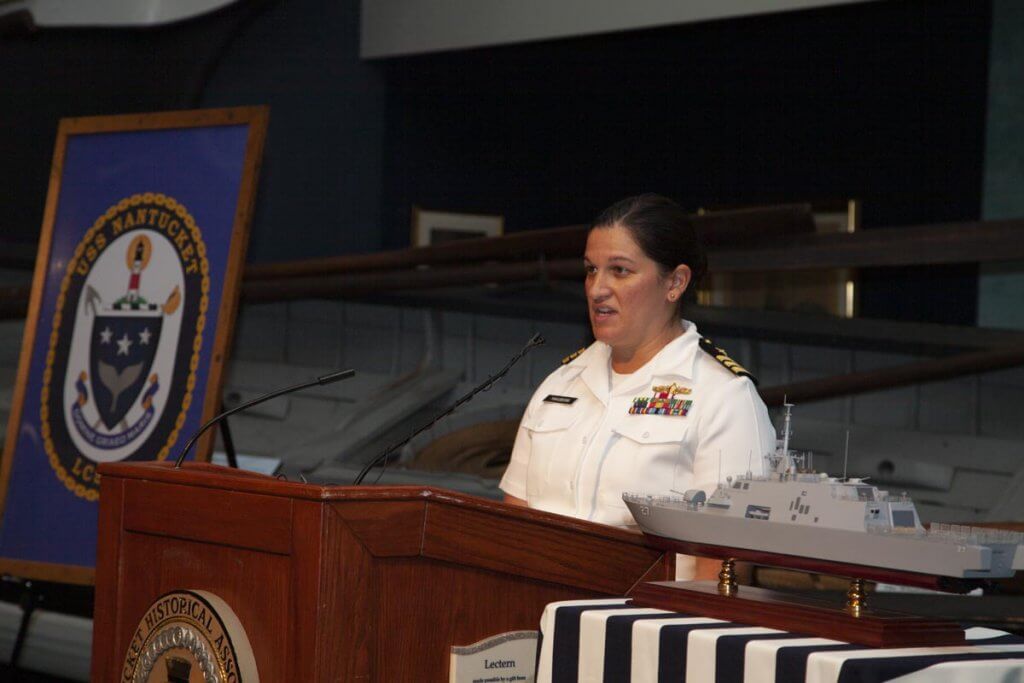 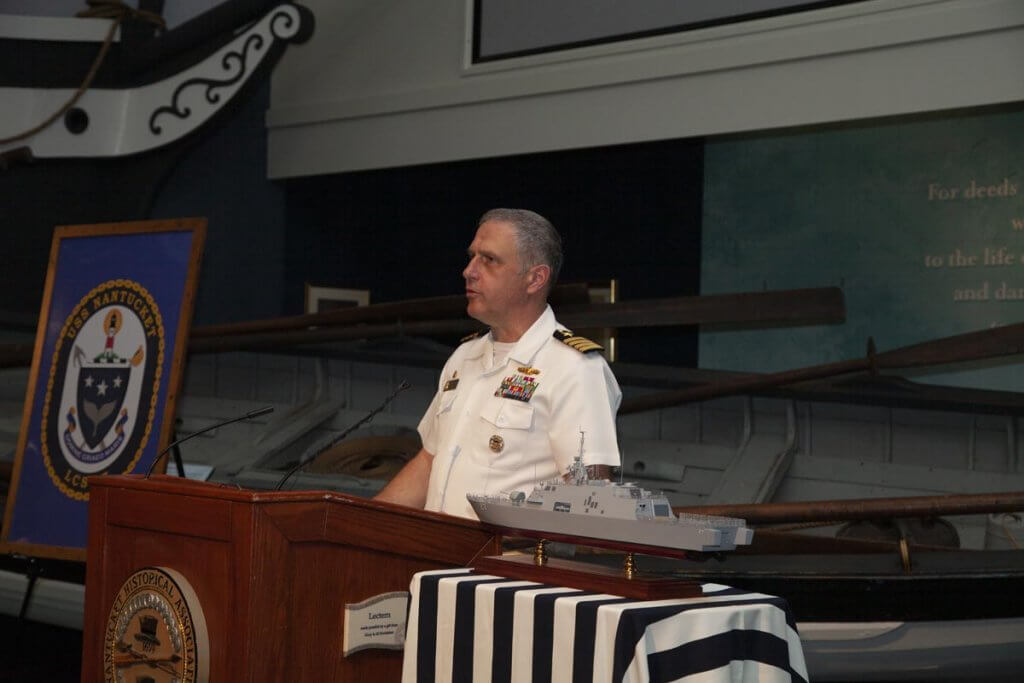 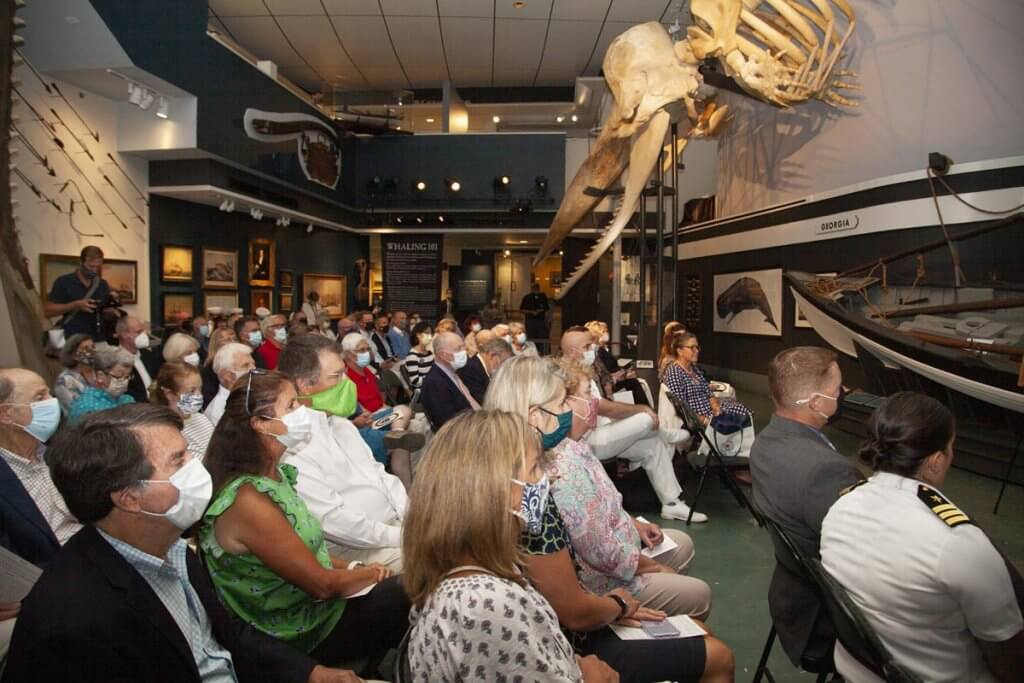 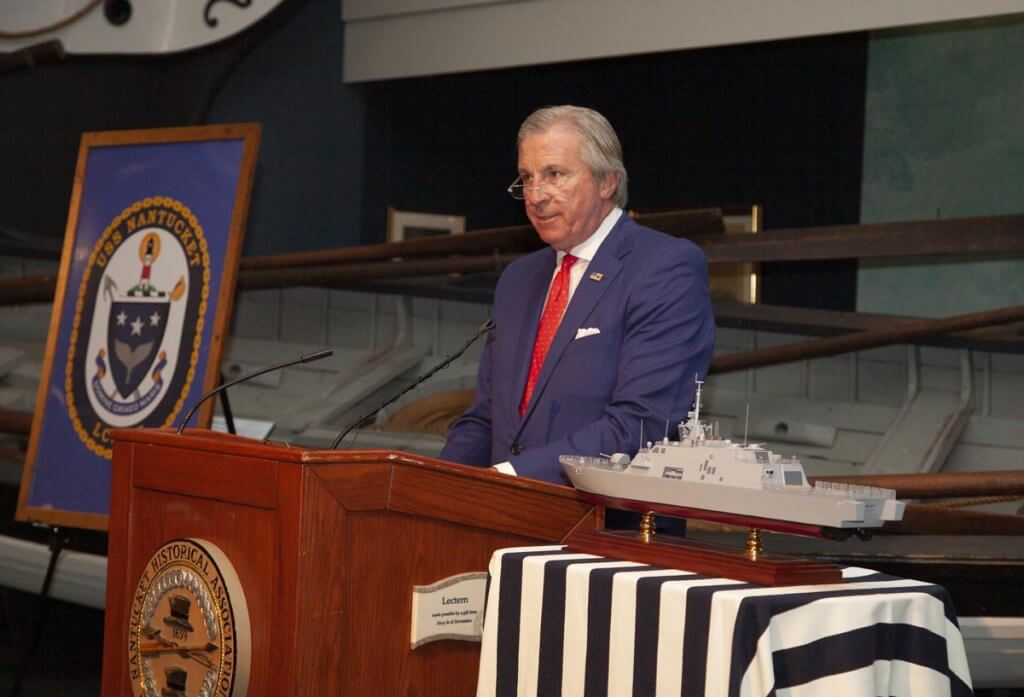 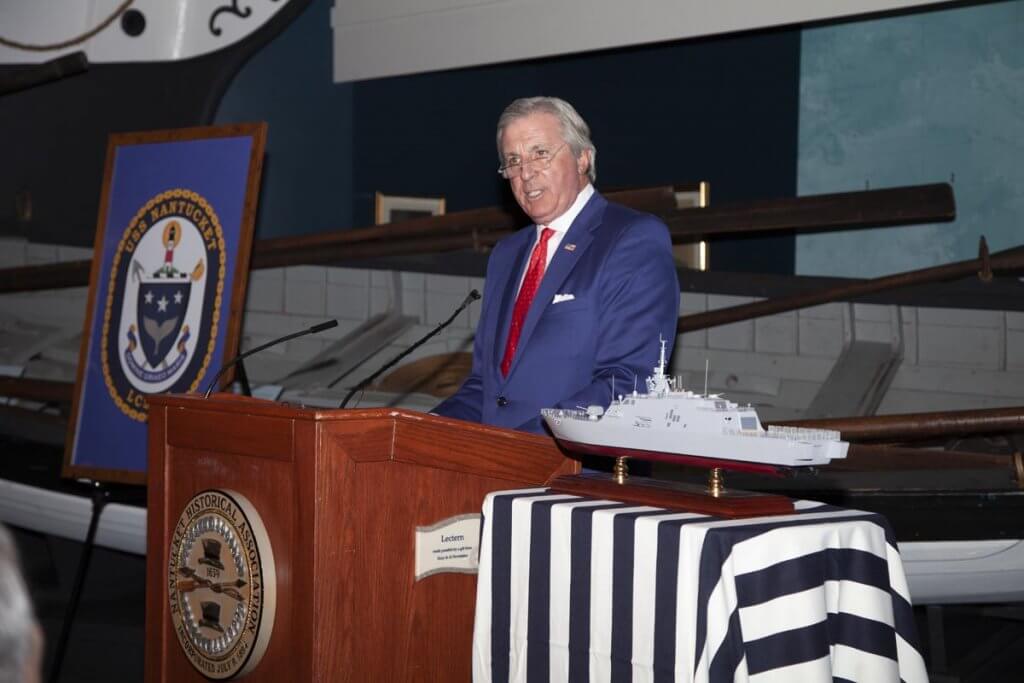 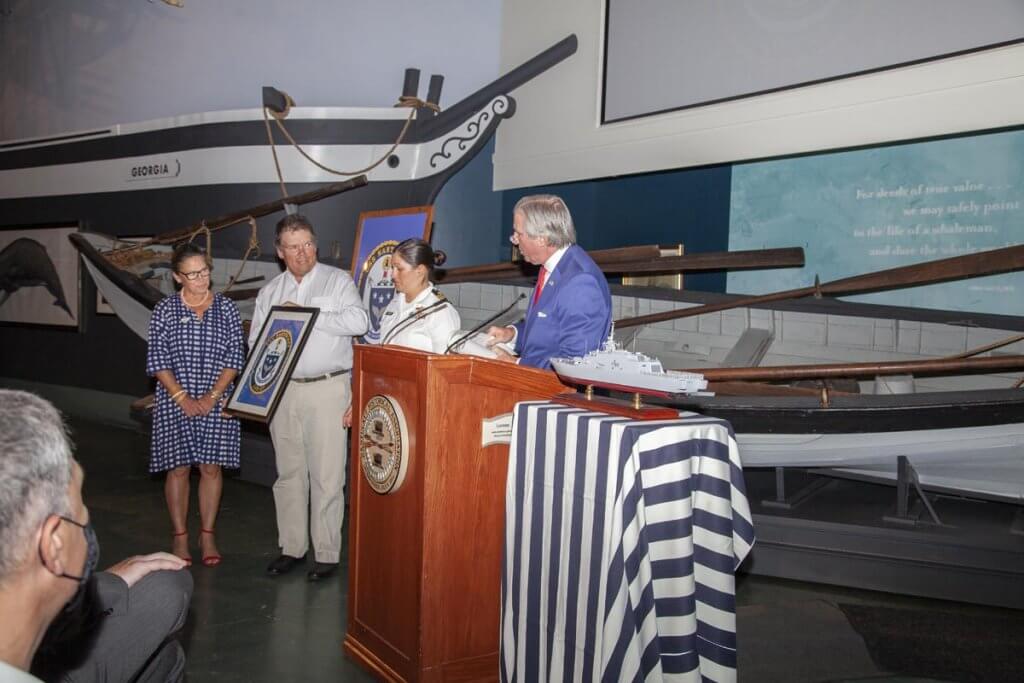 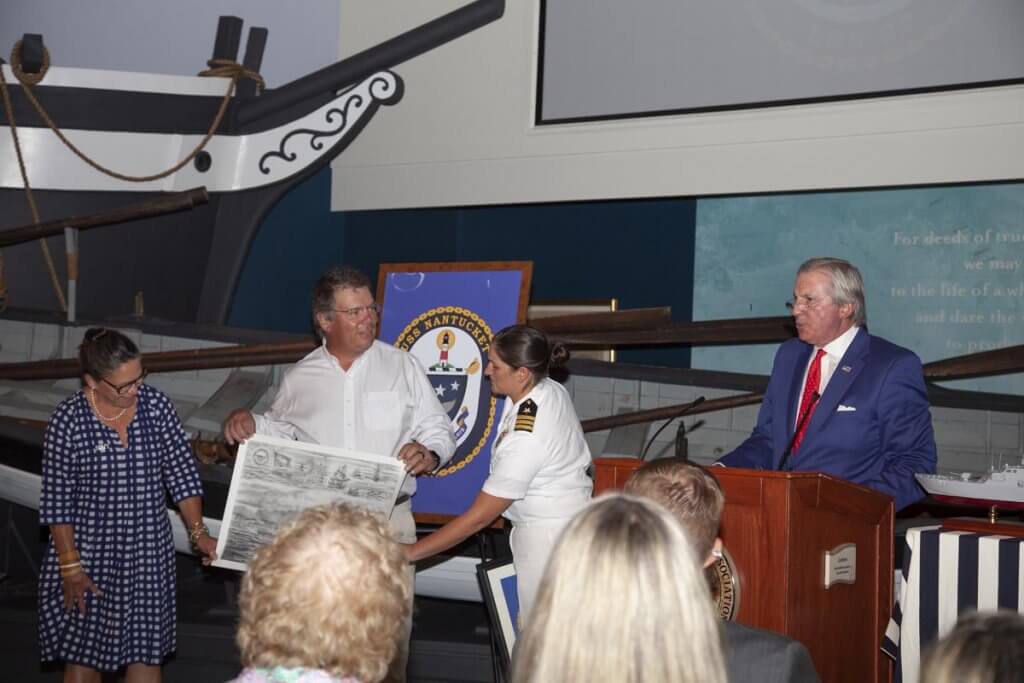 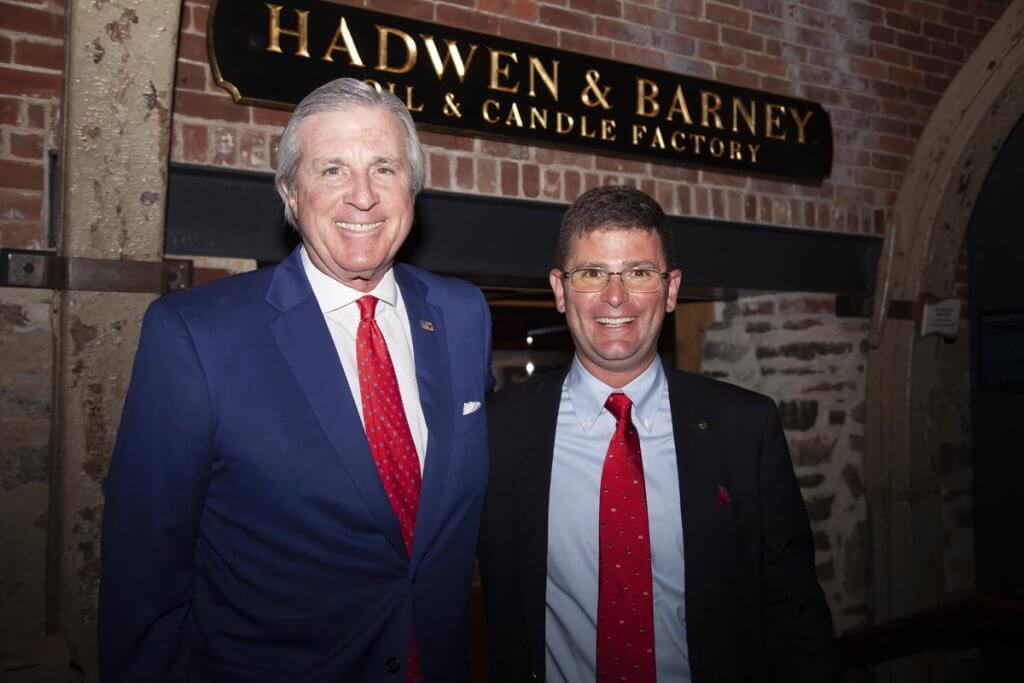 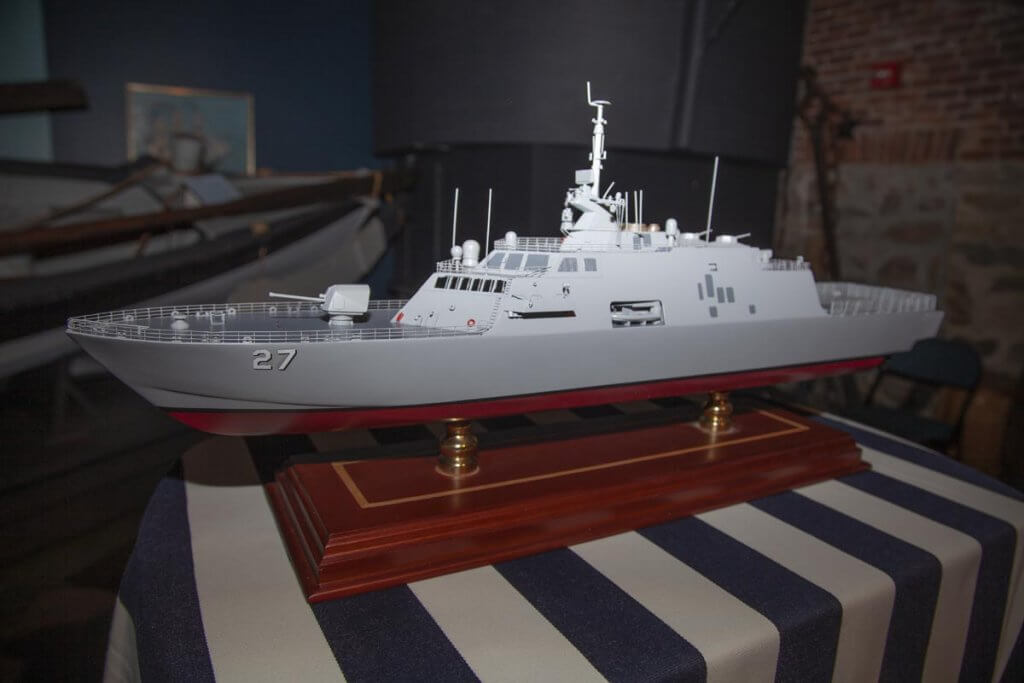 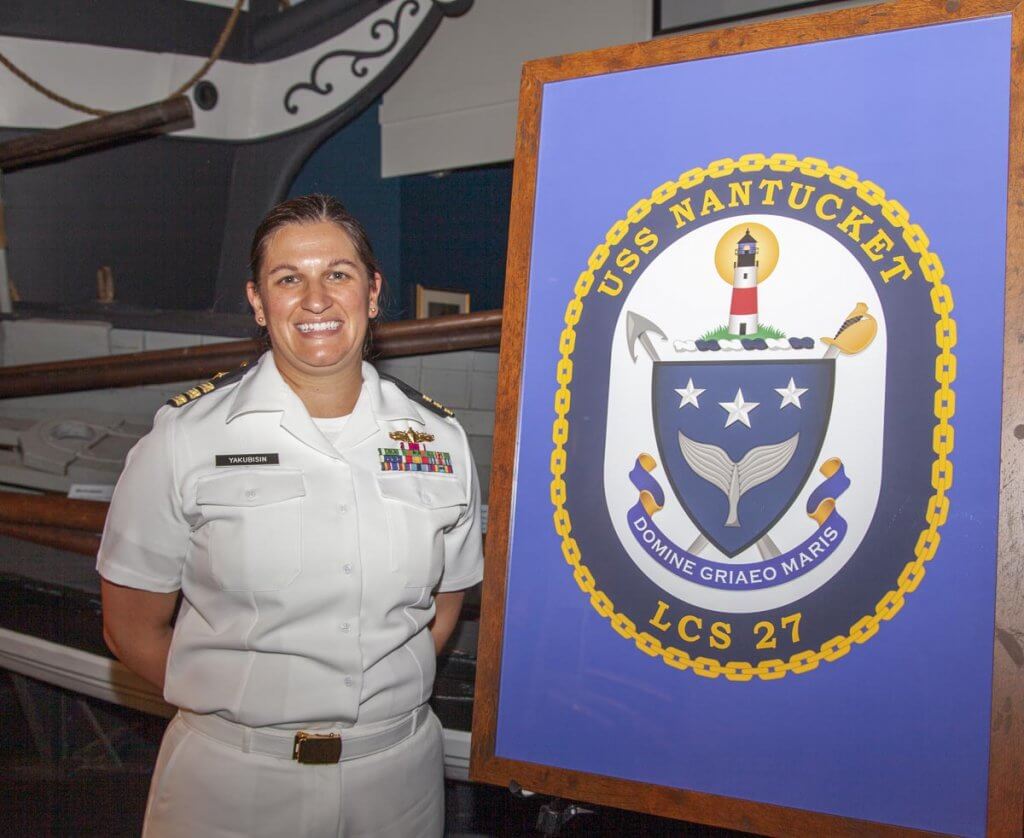 The littoral combat ship (LCS) is a new family of surface ships for the US Navy. The LCS is a fast, highly manoeuvrable, networked surface combat ship.

LCS is designed to meet the urgent requirement for shallow-draft vessels to operate in the littoral (coastal waters) to counter growing potential ‘asymmetric’ threats of coastal mines, quiet diesel submarines and the potential to carry explosives and terrorists on small, fast, armed boats.

To date, there are two separate classes of LCS, Independence and Freedom.  The early Independence class LCS utilized an aluminum hull and superstructure with a trimaran hull form. USS Nantucket, LCS 27, is the 14th Freedom class LCS. The later Freedom class, of which USS Nantucket is a member has a more conventional semiplaning steel monohull with an aluminum superstructure.

USS Nantucket is 377 ft (115 m) in length, displaces 3,500 metric tons (3,400 long tons), and can achieve 47 knots (87 km/h; 54 mph). The design incorporates a large, reconfigurable seaframe to allow rapidly interchangeable mission modules, a flight deck with integrated helicopter launch, recovery and handling system, and the capability to launch and recover boats (manned and unmanned) from both the stern and side.

The flight deck is one and a half times larger than that of a standard surface ship and uses a traversing system to move helicopters in and out of the hangar. USS Nantucket will carry 1 MH-60R/S Seahawk helicopter and 2 MQ-8B / MQ-8C Fire Scout Unmanned Aerial Systems (UAV’s).

The future USS Nantucket is planned for delivery to the Navy in the summer of 2023 and is scheduled to receive the Surface Warfare (SUW) Mission Package.

The fore deck can be used for a Mk. 110 57 mm gun turret or missile launcher. A Rolling Airframe Missile launcher is mounted above the hangar for short-range defense against aircraft and cruise missiles, and .50-caliber gun mounts are provided topside. 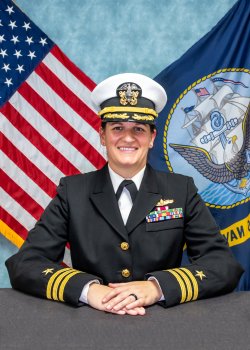 Commander Kari Yakubisin has been selected as Commander of LCS-27 USS Nantucket.  She was commissioned in May 2005 via NROTC at Vanderbilt University where she earned her Bachelor’s degree in Molecular and Cellular Biology. She completed Nuclear Power School and Prototype in Charleston, South Carolina in April of 2008. She earned her Master’s Degree in Engineering Management via Old Dominion University in 2013.

The core crew is 40 sailors, usually joined by a mission package crew and an aviation detachment for a total crew around 75.