The Hadwen House has limitations of authentic 19th-century architecture. The public spaces of the house are entered from a path with two steps and the front porch which has three steps with a handrail.

Service animals are welcome to visit the Hadwen House. We follow the Federal government’s guidelines on service animals. The NHA welcomes dogs that are individually trained to perform a task or work for a person with a disability, but please leave pets at home.

There is a restroom on the first floor available for Historic Site visitors.

About the Hadwen House

The Hadwen House is a Greek Revival mansion built in 1846 by whaling merchant and silver retailer William Hadwen at the peak of Nantucket’s prosperity as the whaling capital of the world. The home is one of the most elaborate examples of Greek revival architecture on the island and the only publicly accessible mansion of its age in the area.

Hadwen purchased the property on the corner of Pleasant and Main in 1844, and commissioned local builder Frederick Brown Coleman, “an artisan who specialized in intricate carvings and designs for pillars,” to construct the two-and-a-half storied clapboard house with a five-bayed façade, colossal pilasters, and a pedimented ionic portico.

The beautifully-proportioned building and its twin Greek Revival mansion at 94 Main Street were the most ostentatious private dwellings the island had ever seen, and a symbol of the wealth and prosperity of the island’s leading citizens. The imposing structure was donated to the Nantucket Historical Association in 1963 by Jean Satler Williams.

In 1964, the Hadwen House was opened to the public as a house museum, and today continues to host visitors. Further preservation projects will allow NHA to expand on the building’s use and public access.

Visitors are also invited to enjoy the ground’s Victorian garden, typical of mid-19th century gardens with an enclosure, border designs, plant variety and succession of blooms with fruit trees and sand paths. The garden is carefully maintained by the Nantucket Garden Club.

Learn more about the history of the Hadwen House

The Hadwen House stands today much as it was when it was built. Hover shows the mansion, ca. 1870 (GPN-schute-50) 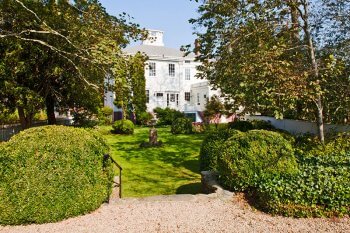 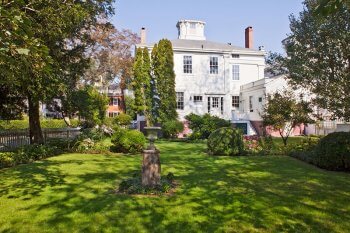 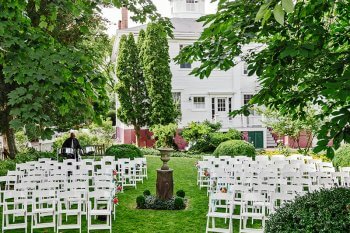 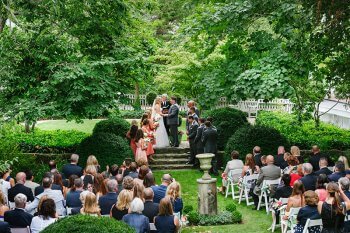 Enjoy the beautiful Victorian garden, maintained by the Nantucket Garden Club, and offering a stunning venue for weddings and private events. Click on the image for a quick tour of the garden.

An exhibit with over 100 Nantucket lightship baskets, exploring artistry and innovation from land-based origins to nineteenth-century lightships into the twenty-first century.

An exhibit showcasing the Decorative Arts Collection of the NHA, from fine furniture, tall clocks, and ceramics to an eclectic display of curiously carved artifacts.

An exhibit presenting a selection of historic maps and nautical charts from the NHA collection.

Private Events at the Hadwen House