The Thomas Macy house has limitations of authentic 18th-century architecture and is not wheelchair-accessible. Steep stairs and narrow stone pathways may present difficulties for those with physical disabilities.

Service animals are welcome to visit the Thomas Macy House. We follow the Federal government’s guidelines on service animals. The NHA welcomes dogs that are individually trained to perform a task or work for a person with a disability, but please leave pets at home.

About the Thomas Macy House

The original house on this property was built by Valentine Swain sometime between 1799 and 1804.  It was a small three-bay house with the door on the left and two windows on the right.

Thomas Macy and his wife Eunice remodeled the house in 1832. Thomas was a sixth-generation descendent of the original settler of the same name. Thomas had risen from being a blacksmith to a shareholder in several whaleships.  He and his brother, Peter, owned the Thomas Macy Warehouse on Straight Wharf, which still stands today.

Macy added 14 feet to the west end, converting it to a 2-chimney house with a central transverse stair hall. It is a Federal-style home with a roofwalk, balustrade, louvered shutters, sidelights, ship’s rail fence, elliptical blind fan and clapboard façade. The house remained in the Macy family for more than 100 years.

Jacqueline Harris purchased the house in 1947, always planning to bequeath it to the NHA.  Her daughter and son-in-law, Sallie Gail and Oswald Tupancy, made her wishes a reality in 1987.  Oswald set up the Tupancy-Harris Foundation in 1986, which provides funds for the permanent maintenance of the house.

Today, the house and everything you see in the home is left just as it was when Jacqueline lived here. She was meticulous about interpreting the house as it would have been in Thomas Macy’s time, stewarding this island treasure in the spirit of the whaling era.

When Thomas and Eunice Macy lived here, the garden was described as “terraced and laid out in box-edged beds where beautiful flowers succeeded one another from fragrant hyacinths to stately dahlias” similar to the garden at Hadwen House.  Gardens were very ornamental and often had greenhouses.  Eunice Coffin Macy was an avid gardener.

Today the garden is a green and white landscape with a manicured lawn, surrounded by white hydrangeas and other white flowers and blooming shrubs.

Learn more about the history of the Thomas Macy House

Hear the story of how Thomas and Eunice Macy turned a simple structure into an elegant home that established the Macys as one of the leading families of the neigh­borhood.

Jacqueline Harris and her family were enthusiastic collectors, and everything you see in the home is left just as it was when she lived here, from china to linens, even her childhood dolls. The dining room features a Chippendale table, English silver, English portraits, and items from the Harrises’ Asian collections.

Jacqueline’s library is, again, her interpretation of an old room. Note the servant call button to the left of the fireplace. There were servants’ quarters above this room. 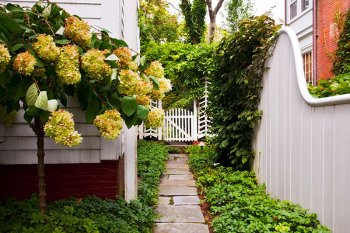 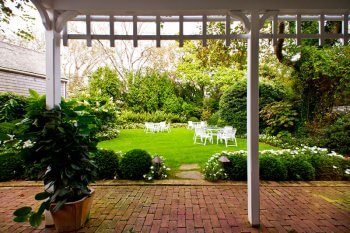 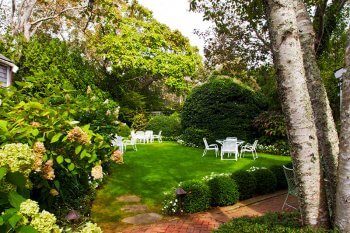 Enjoy the restful green and white landscape of the garden. Click on the image for a quick tour.