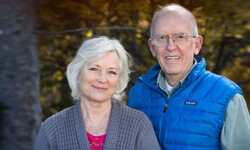 NANTUCKET, MA – The Nantucket Historical Association (NHA) is pleased to welcome special guests Dr. Roger Payne and actress Lisa Harrow for a one-night only performance of SeaChange: Reversing the Tide on Wednesday, August 30, 2017, at 7 P.M. at the Whaling Museum, 13 Broad Street.

Should everything dance to humanity’s tune, or might that lead to the destruction of life on Earth? This question is addressed by the performance piece SeaChange: Reversing the Tide. By combining knowledge of science with the wisdom of poetry, Payne and Harrow argue compellingly that man is not the overseer of life but an integral part of life’s complex web, and that our survival requires that we attend not to just our own well-being, but make the well-being of the entire web of life a primary consideration for every action we take, for if we do less we will have no future.

Dr. Roger Payne is the biologist famous for the discovery of humpback whale songs in the 1960s, and an environmentalist who has played a major role in the worldwide campaign to end commercial whaling. He has an AB from Harvard and a Ph.D. from Cornell. Payne is best known for his co-discovery (with Scott McVay) that humpback whales actually sing songs. His 1971 article in National Geographic magazine included a playable recording of whale songs.

Payne has led over 100 expeditions to all oceans and studied every species of large whale in the wild. He pioneered many of the benign research techniques now used throughout the world to study free-swimming whales, and he has trained many of the current leaders in whale research, both in the US and abroad. Payne has lectured at most major U.K. and U.S. universities, and from 1971-1990 appeared on most major TV and radio talk shows, as well as being the subject of more than 40 television films. Payne was also featured in the 2015 Jane and Payne, exploring his friendship with Jane Goodall.
Lisa Harrow was born in New Zealand. In 1966, she was awarded a scholarship from the N.Z. Queen Elizabeth II Arts Council to study acting abroad, and was accepted by the Royal Academy of Dramatic Art in London. Upon leaving RADA she was invited to audition for the Royal Shakespeare Company (RSC) and in her first season with them played Olivia in Twelfth Night (opposite Judi Dench). Other roles with the RSC included Desdemona in Othello, Anne Bullen in Henry VIII, Portia in Merchant Of Venice, (opposite Patrick Stewart), and Lady Amaranth in Wild Oats (opposite Alan Howard). Other English theatrical highlights include Juliet in Romeo and Juliet (opposite John Hurt), Eliza in Pygmalion, The Queen in The Eagle has Two Heads (directed by Susannah York), and Anne Whitfield in Man and Superman opposite Peter O’Toole.

Her film career started in Rome, playing opposite Glenda Jackson in The Tempter for which she won the Variety Club’s Most Promising Newcomer Award. Gillian Armstrong’s film, The Last Days of Chez Nous earned Lisa an Australian Oscar for Best Actress. In 1997, her film Sunday (opposite David Suchet), won The Grand Jury Award at the Sundance Film Festival, as well as an Independent Spirit Award nomination for Best Actress.

In 1997, Harrow moved from London to Vermont with her husband and her son Tim (by actor Sam Neill). Because of her involvement in creating SeaChange: Reversing the Tide, Harrow wrote the environmental handbook What Can I Do, separate editions of which were published in the US, Australia New Zealand and the UK.

“We are thrilled to welcome Dr. Roger Payne and renowned actress Lisa Harrow to the Whaling Museum for this one-of-a-kind performance,” says Brianne Roth, NHA Public Programs Coordinator. “Guests are sure to be delighted and inspired by this powerful and educational experience.”
This performance is being presented with the generous support of the Hall-Froelich Foundation.

Admission to this evening is only $25 per person, which includes a short reception following the program. Tickets are on sale now at www.nha.org/tickets.

Doors open at 6:30 P.M., with the performance beginning promptly at 7 P.M.