Asian Treasures from the Billings Collection offers a unique opportunity to explore an incredible variety of artistic creations. The collection of Asian art assembled over fifty years by David Billings and Beverly Hall Billings provides a window into five thousand years of artistic tradition in China, Tibet, India, Burma, Korea, and Japan. The works showcased range from ceramics and bronzes to textiles and jewelry. They form a feast for the eyes and link to fascinating stories from the sweep of eastern history. 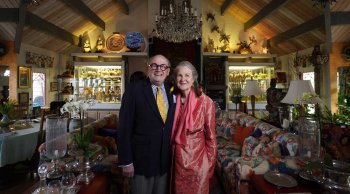 The Asian art collection of David Billings and Beverly Hall Billings is a testament to the evocative power of the past to inspire the present. David, who lectures on Chinese art, is frequently immersed in research, keen to understand the context and history of pieces in the collection. Beverly, a photographer, combines knowledgeable support, an artistic eye, and a fascination to learn the stories that animate each artifact. This exhibition contains but a sampling of their collection of over 2,500 objects, many of which are on public view here for the first time.

The Billings Collection is impressive in its breadth and depth, with many subjects and materials represented. It reveals the keen eye of collectors who delight in finding the ideal treasure and relating its story to others. The Still Life by the Dutch painter Jan Davidszoon de Heem incorporates a Chinese Kraak ware bowl made for export. The ceramics range in date from the Neolithic period to the Qing dynasty and demonstrate a wide variety of designs and glazes. Ritual bronze vessels as well as mirrors demonstrate the Chinese skill in casting. The Buddhist Lohan exemplifies the religion which originated in India and traveled throughout Asia, while a magnificent lady’s robe, court necklace, hats, and shoes illustrate the clothing and accessories worn by the elite in Imperial China.

The richness of Chinese life has many aspects which are illustrated by the objects in this section. Confucius (ca. 551–479 BCE) profoundly influenced Chinese culture. His writings formed the basis of study for aspiring bureaucrats looking to qualify for government positions. The Scholar’s Desk tableau includes the numerous calligraphic objects required for a successful career. Opium smoking became immensely popular in the 19th century, a leisured, urban, and cultural status symbol that also sparked international conflict. Be sure to admire the range of snuff bottles and the examples of currency, garments, and accessories.

The Chinese believe that each person has two souls. Upon death one ascends to heaven, while the other remains on earth buried in the tomb. Consequently, the contents of a tomb must keep the occupant happy in the afterlife. Note the money tree and treasure chest: the wealth and status of the occupant determined the quantity and quality of the tomb contents. These items provide valuable clues to life in the past, as few everyday objects survive from early Chinese history. A model of a house suggests architectural forms from the past. Dancers, storytellers, musicians, and acrobats imply popular entertainments, while soldiers, fierce beasts, and lokapalas offer protection. Protecting the body of the deceased was also important, leading to the creation of jade burial suits, which were believed during the Han dynasty to prevent decomposition of the body.

Buddhism originated in India where the historical Buddha, Shakyamuni, was born and preached the doctrine leading to enlightenment. As the religion developed and spread throughout Asia, images of the Buddha and of other deities, such as Guanyin, the Bodhisattva of Infinite Compassion and Mercy, proliferated. In Japan, household shrines like the intricate and complex butsudan offered opportunities for private worship. Drinking tea to focus attention during meditation led to special accoutrements for tea preparation and service. A large and colorful censor documents the practice of burning incense. In Tibet, another form of Buddhism emerged based on esoteric scriptures, yogic meditation, and elaborate rituals. Paintings and ritual objects were essential to this practice.

Thank you to our Lead Corporate Sponsor

With generous support from: